From Plaster to Crepe bandage within hours: All seems well with Mamata 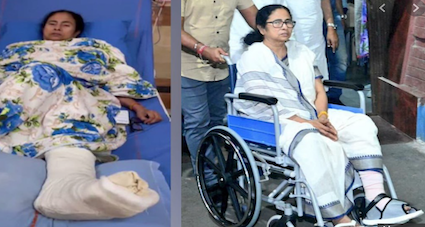 West Bengal Chief Minister, Mamata Banerjee, was admitted to SSKM hospital with the sorry images of her leg in plaster on March 10 after filing her nomination in Nandigram constituency. She has been been discharged in less than 48 hours with her foot in crepe bandages.

The Trinamool Congress supremo was seen being wheeled out of the hospital on Friday, heading to her Kalighat residence. It brought a sigh of relief to her supporters; her party workers who were quick to accompany her exit from the hospital.

Social Media meanwhile has erupted at this quick turnaround on the state of Mamata’s injured leg.

Hey Didi @mamataofficial,
Big fan. Can you please tell me name of your doctor? Even I want my broken leg to be healed in one day. pic.twitter.com/9MXEt0LYVx

Interestingly, Mamata was said to have suffered “severe bone injuries” by doctors attending her after she had her car door slammed on her while greeting crowd in Nandigram on Wednesday. Eyewitnesses claimed it was an “accident” while Trinamool Congress leaders are painting the town red, so to speak, claiming it was a BJP conspiracy and a fair deal of blame should come Election Commission’s (EC) way too.

As soon as her picture outside the hospital with a crepe bandage got viral, social media users were quick to express their surprise and asked how her hairline injury got cured in a span of two days, and her fracture bandage (plaster) was replaced with a crepe in such a short span of time. One of the social media users even said that she made a Guinness World Record for removing fracture bandages in such a quick time.

Describing how the CM suffered the injury, the eyewitnesses said Mamata Banerjee was greeting the crowd with folded hands from her car. The car was moving, and she had kept the door of the car open to greet the people waiting by the roadside. Later the open door hit an apparently short iron pillar, resulting in injuries to her.