Galwan Ke Veer: A video in memory of India’s brave martyrs in Ladakh 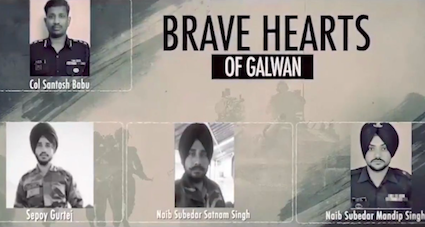 The Indian Army has released a video song on the first anniversary of the Galwan Valley clash, in which they have paid a tribute to the Indian soldiers who fought the Chinese troops valiantly in Ladakh.

The nearly five-minute video captured glimpses of the lives of soldiers deployed along the ice-capped mountains of the high-altitude region including their round-the-clock vigil, training and combat readiness to deal with any threat.

Earlier on Tuesday, the Indian Army paid homage to the Galwan martyrs and laid a wreath at the Leh War Memorial.

The names of the 20 Army personnel were also inscribed on the National War Memorial in Delhi in January last.

A statement issued by PRO Defence, Srinagar said the “Nation will remain eternally grateful to these gallant soldiers who fought in the most difficult high altitude terrain and made the supreme sacrifice in service of the nation.