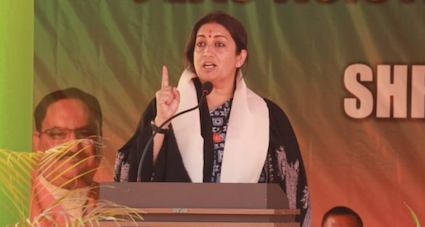 “Prime Minister Modi launched the Kisan Samman Nidhi scheme. Around 11 crore farmers are given Rs 6,000 every year. If voted to power again, we’ll give additional Rs 2,000 to the farmers of Manipur,” ANO quoted Irani as saying.

Addressing a public rally, the Union Minister announced that if the BJP is re-elected in the state then it would form a corpus fund of Rs 100 crore for startups in Manipur.

“In the past seven years, the BJP government has promoted the creation of 60,000 startups in the country. If the BJP forms its government in the state, then it would create a corpus fund of Rs 100 crore exclusively for startups in Manipur,” she said.

The elections will be held in Manipur to elect 60 members of the Legislative Assembly in two phases. Voting for the first phase will be held on February 28, and the second phase on March 5. The results will be declared on March 10, as per the Election Commission of India (ECI).

In previous assembly polls, Congress had won a total of 28 seats and emerged as the single largest party in the 60-member Manipur house. However, the grand old party couldn’t form the government and saw its members deserting the party from time to time.

Later, the BJP formed the government in the state with the support of three regional parties – Naga People’s Front (NPF) National Peoples Party (NPP), and the Lok Janshakti Party (LJP), while it also got the support of an independent MLA.

N Biren Singh, who had joined the BJP in 2016 after quitting Congress, became the 12th Chief Minister on Manipur.