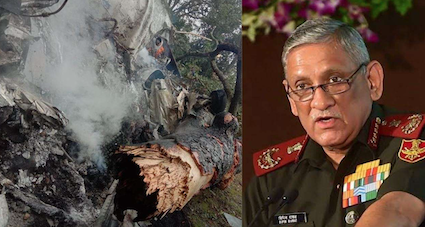 Chief of Defence Staff (CDS) General Bipin Rawat was alive and said his name when he was pulled out of the crashed IAF Mi-17V5.

A firefighter, NC Murali, who was part of the rescue team informed that when he was being pulled from the wreckage of an Indian Air Force helicopter, he told his name and died on his way to the hospital.

“We saved two people alive. One was CDS Rawat. As soon as we pulled him out, he spoke to the defense personnel in a low voice in Hindi and said his name. He died on his way to the hospital. We could not immediately identify the other person who was taken to the hospital and is currently undergoing treatment,” he said.

The other person who was extricated from the wreckage was later identified as Group Captain Varun Singh.

The rescue team informed that as it was a forested area with no concrete road, which delayed the entire process.

The rescue team found the area difficult. “There was no way to move the fire engine to douse the fire. We had to bring water in pots from nearby rivers and houses. The operation was so difficult as we had to cut open the jagged pieces of the chopper to rescue people or retrieve the bodies,” said Murali.

IAF personnel joined the rescue operation halfway and guided the team into the mangled portions of the chopper. “Weapons were lying amid the debris; so we had to carry out the operation carefully.”