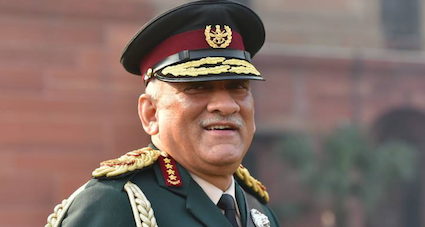 Chief of Defence Staff Bipin Rawat was on an army chopper that crashed in Tamil Nadu a short while ago.

General Rawat’s staff and family members were also among the 14 people on board.

The Indian Air Force confirmed on Twitter that the Chief of Defence Staff was on the flight. He had taken a flight from Delhi to Sulur earlier today.

“An IAF Mi-17V5 helicopter, with CDS Gen Bipin Rawat on board, met with an accident today near Coonoor, Tamil Nadu. An Inquiry has been ordered to ascertain the cause of the accident.”

The crash took place in the Nilgiris, shortly after the Mi-series chopper took off from the army base in Sulur.

The chopper was heading to the Wellington defence establishment.

Images on local TV channels showed the wreckage in the hills and rescuers at work, struggling through thick smoke and fire.

The helicopter was already making its descent and would have landed in 10 more minutes. It came down around 10 km from the nearest road, forcing emergency workers to trek to the accident site, said news agency AFP.

The crash was first reported around 12.20 pm.

Visuals showed wreckage scattered on a hillside and rescuers struggling through thick smoke and fire. Charred bodies were pulled out by locals and cops from under mangled metal and fallen trees.

General Rawat, 63, took charge as India’s first Chief of Defence Staff in January 2019. The position was set up with the aim of integrating the three services – the Army, the Navy and the Air Force. The “CDS” is seen to be the pivot of long-delayed modernisation of the defence forces.

He was also appointed the head of the newly-created Department of Military Affairs.

Here is the list of people who were on board the chopper that crashed:

Five crew members were also there in the chopper.

The crash site in the Niligiri Hills is in a forested area, which makes access to the wreckage a difficult proposition. Visuals showed the wreckage scattered on the hillside and rescuers at work, struggling through thick smoke and fire.