General Niazi, a war-hero in undivided India; a villain like few in Pakistan 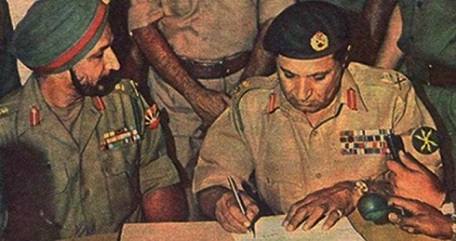 (December 16 is celebrated as Vijay Diwas on account of India’s win in 1971 War against Pakistan. Sant Kumar Sharma pens a sensitive piece on a General who rose and fell like few in military history.)

One of the finest military victories of the Indian Army was scored on December 16, 1971, when it midwifed the birth of a new nation. What fell was East Pakistan and what rose from its ashes after tremendous destruction and mayhem was Bangladesh. It is important to recount the surrender ceremony of that day when Lt Gen A K Niazi handed over his personal weapon to Lt Gen J S Aurora. (Historic Instrument of Surrender below):

Born in August 1947, Pakistan which the British had created as a parting kick to India, vivisecting it, could survive barely 24 years and a few months. The birth of Bangladesh was a repudiation of the two-nation theory propounded by Ali Mohammad Jinnah and fanned by the British.

There are some aspects of the history of 1971 India-Pakistan war that need to be seen from some different perspectives also. In 1971, Niazi was a fallen general but once upon a time, he was an Indian soldier and on December 15, 1944, as a young Lieutenant then, got a Military Cross (MC) for conspicuous bravery from Viceroy Lord Wavell. He also got the sobriquet of ‘Tiger’ from his superiors who were impressed by his performance in Assam-Manipur (Burma front). Earning his spurs at a very young age, ‘Tiger’ was considered extremely brave and innovative in battle tactics.

Another Indian officer who got MC from the Viceroy that day was Major Sam Maneckshaw of the Frontier Force Regiment. Incidentally, the regiment is now part of Pakistani armed forces and had played a important part in battles, mainly on northern frontier in the British era. It was also known as North West Frontier Province (NWFP) at one time and is now known as Khyber Pakhtunkhwa (KP).

The month of December played extraordinarily important role in Niazi’s life as he faced perhaps the best and the most ignominious moments of his life in this month only. We have already talked of perhaps the finest moment of his life and December 16, 1971, was the worst moment for him as an individual and his country Pakistan when he had to sign surrender documents in presence of Lt Gen J S Aurora, Major General JFR Jacob and others.

A full 27 years later, Lt Gen Niazi and General Sam Manekshaw were in opposite camps, unlike in 1944. The day brought abject defeat and dishonour for Niazi while for Manekshaw, as he could perhaps have defined December 16, 1971, the finest moment of his life. Another thing about Niazi that perhaps tells us how fate can deal cruel blows when we look back to see that he had volunteered to take up the command of East Pakistan. Before Lt Gen Niazi, Lt Gen Bahadur Sher Khan had declined this posting, perhaps aware of the perils of this appointment.

Two more generals of the Pakistani army had also refused postings in then East Pakistan, and some junior officers too. Lt Gen Niazi took over command from his predecessor, Lt Gen Tikka Khan, whose tenure saw Bengalis turning hostile to Pakistani military. The reign of terror, mass killings, rapes and massacres of Bengali intellectuals that Tikka initiated provided a fertile ground for Mukti Bahini. A guerrilla force that played an important role in Bangladesh’s liberation, it was provided training for about six months by elements of Indian forces.

If only irony had a face, perhaps Niazi’s career is what we need to see in a detached manner, rising to dizzy heights and plummeting to the lowest depths. Incidentally, he was a Brigadier during 1960-64 period and taught, believe it or not, infiltration tactics at the Command and Staff College in Pakistan. He also wrote about on infiltration and participated in discussions on military supported local rebellion against the enemy. All these strategies and tactical points that he accounted were of no avail when infiltrations started happening on his own terrain just seven years later and he could do little to halt them.

By August 1971, Lt Gen Niazi had created tentative plans to defend East Pakistan against the twin threats of the Indian Army and Mukti Bahini guerrillas. Two months earlier, in June 1971, he is on record as having said that there were perhaps more than 30,000 Mukti Bahini volunteers raring to go against the Pakistani military. He worked on a concept of building fortresses, or strongholds, on strategic border towns and villages.

The advancing columns of the Indian troops as also Mukti Bahini guerrillas got around these strongholds, without challenging them significantly. This led to a false sense of invincibility, and in turn security, among those defending Dhaka and other strategic towns in East Pakistan. According to some historical accounts, at one time the odds were such that 50,000 Indian troops were holding 90,000+ Pakistani soldiers!

By October 1971, as hostilities from the Mukti Bahini gained significant movement, Niazi was cut off from the Pakistan Army GHQ (general headquarters). He was thus all on his own, and the buck stopped at him like never before as no instructions were forthcoming from West Pakistan. The lack of communication between East and West wings of Pakistan can perhaps also be imagined from the fact that Niazi knew nothing about the Pakistani Air Force (PAF) attacking many airfields in India on December 3! Does this also show that he had been virtually left on his own to handle the situation as best as he could?

Lt Gen Niazi was taken prisoner on surrendering on December 16, 1971, after he handed over his pistol as a token of surrender. He remained a prisoner of war (PoW) in India for a few years and was deported via Attari-Wagah border to Pakistan in April 1975 as the last prisoner. His misfortunes didn’t end with his repatriation as he was virtually made a scapegoat for the follies of Pakistan government. He was imprisoned in Pakistan too for a long spell and the allegation against him was that he had shown cowardice! Niazi was stripped of the military honour that Pakistan had bestowed upon him.

Niazi requested that he be tried in a military court but this request was turned down and he was tried in a civil court which returned a guilty verdict. The policies of persecution of Bengali-speaking East Pakistanis were not initiated by him but his predecessor. The policy of not allowing Sheikh Mujibur Rahman to take over reins of a united Pakistan, both East and West, could not be blamed on him. Zulfikar Ali Bhutto and other top politicians of the western wing of Pakistan were to be balmed for it. Perhaps reading multiple accounts of military victories and defeats gives us a better understanding of the things as they may have unfolded when they did.

After giving an interview, Niazi died on 1 February 2004 in Lahore, Punjab, Pakistan. He was buried in a Military Graveyard in Lahore