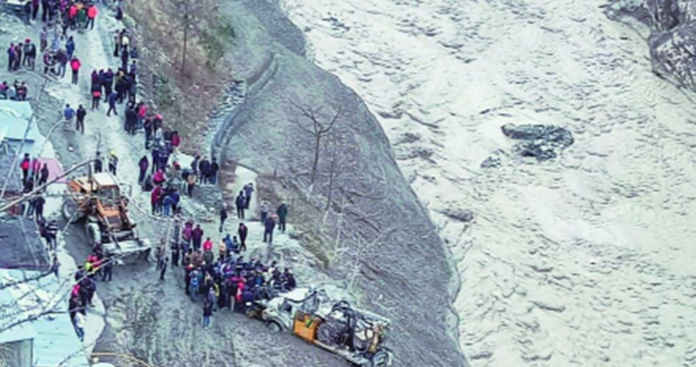 A glacier burst has been reported near the India-China border in Sumna village of Uttarakhand’s Chamoli Garhwal district because of heavy snowfall in the region.  Colonel Manish Kapil, Commander, Border Road Task Force (BRTF) informed media persons about the incident.

Border Road Organisation (BRO) is trying to establish contact with workers who were involved in road construction activities in the area.

As per the latest inputs, the Indian Army had informed that they have recovered a  total of 8 bodies from the site. Further, the Army said  the rescue operation is in progress at the avalanche site and they have rescued 384 persons so far.

“It is expected to take another six to eight hours to clear this complete axis,” they added.

Reacting to the incident, the state DGP Ashok Kumar in a tweet said that the information about the incident is being collected. “We are trying to gather information whether any loss of life has occurred in the glacier burst. Due to bad weather in the region, we are unable to know the exact situation. Teams have been sent to take stock of the situation. The ITBP personnel deployed in the area are safe.”