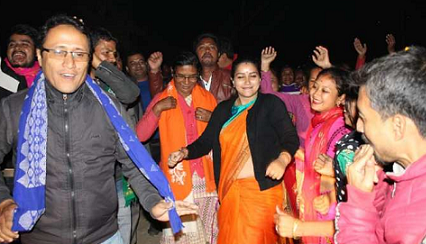 Good news is raining on Bharatiya Janata Party in Assam. First it formed the executive committee in the Bodoland Territorial Council in alliance with the UPPl. Now it has claimed another autonomous council in the state. It won 33 out of 36 seats in the Tiwa autonomous Council (TAC) elections which took place on Saturday.

The other three seats went to AGP while Congress won 1 out of the 35 seats it contested.

Interestingly, BJP had claimed it would win 25-30 seats in the elections. It ended up winning much more.

BJP president JP Nadda was thankful for the verdict. “Thank you Assam for this massive mandate to BJP in Tiwa Autonomous Council elections. “

Unlike the Bodoland Territorial Council, the Tiwa Autonomous Council is not formed under Sixth schedule of the constitution. Apart from BTC, Dima Hasao Autonomous District Council and Karbi Anglong Autonomous District Council are under the sixth schedule. Apart from these three, there are six autonomous councils in the state formed under state law. All of them relates to specific tribes living in the state.

Other than the Tiwa council, the other autonomous councils under state law are Rabha Hasong A, Mising, Deori, Thengal Kachari and Sonowal Kachari Autonomous Council. The Assam Assembly has recently approved creation of three more councils, they are, Moran, Matak and the Kamatapur Autonomous Council.