Hafiz Saeed gets 10 years of jail in 2 terror cases; many still pending 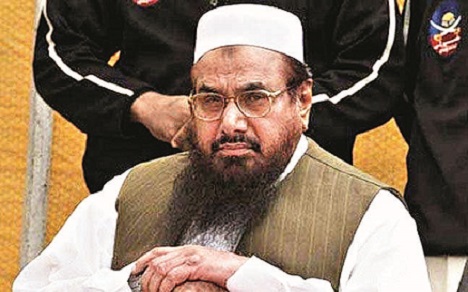 Hafiz Saeed, the mastermind of the 26/11 Mumbai attacks, has been sentenced to 10 years jail in two terror cases by a court in Pakistan, reports PTI.

This is not the first time that Hafiz Saeed has been sentenced. He and his aides were convicted and sentenced to 11 years in a terror financing case this February. He is the head of the Jamaat-ud-Dawa, a front organisation for the terror group Lashkar-e-Taiba (LeT).

Hafiz Saeed is wanted in India for planning the attack in Mumbai in 2008, when 10 terrorists killed 166 people and injured hundreds more. He is also known as a “global terrorist” both by the United Nations and the US, which put a $10 million bounty on his head.

Hafiz Saeed was arrested in Pakistan in July last year in connection with terror-financing cases after international pressure built up on Pakistan to come clean.

He is being kept at Lahore’s high-security Kot Lakhpat jail.

The global terror financing watchdog Financial Action Task Force (FATF) is instrumental in pushing Pakistan to take measures against terrorists roaming freely in Pakistan and using its territory to carry out attacks in India.

Pakistan’s counter-terrorism department had filed 41 cases against Jamaat-ud-Dawa leaders and four cases against Hafiz Saeed have been decided so far. The rest are pending in several anti-terrorism courts across Pakistan.

India gave proof to the Paris-headquartered FATF through several dossiers last year about how Pakistani agencies are funding the terror group Jaish-e-Mohammed that was responsible for a car bomb attack on a CRPF convoy in Jammu and Kashmir’s Pulwama in February 2019.

Since then Pakistan has been facing possible blacklisting by the FATF, which could lead to downgrading of the country by lenders like International Monetary Fund, World Bank, Asian Development Bank and European Union.