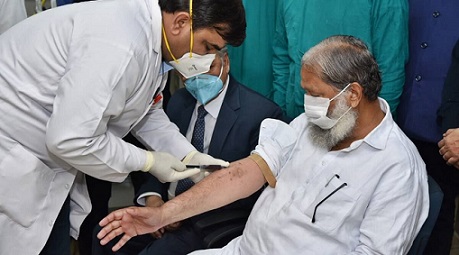 Haryana Health and Home Minister Anil Vij testing positive for Corona virus has sent tongues wagging about the efficacy of Bharat Biotech’s Covaxin. This is because he was administered a dose of Covaxin at an Ambala hospital some days ago. It needs to be mentioned here that he had volunteered for third phase trail of this vaccine now underway.

Another point to note here is that during the vaccine regime that has been evolved, two doses of Covaxin, 28 days apart, are administered. It is only after some weeks that the vaccine generates enough anti-bodies in the body that give immunity against the Wuhan virus. On this count too, Vij had received only one shot during the trial and not been administered the second dose.

It is important to allay fears and bury rumours regarding Covaxin in the bud as any negative publicity is not needed at this juncture. Bharat Biotech, the developer of Covaxin, is working closely with Indian Council of Medical Research (ICMR) and National Institute of Virology, Pune. It had started its third phase trial from November 16, which involved 26,000 volunteers across 25 centres across the country. Vij is only one of those 26,0000 volunteers who had stepped forward to participate in these trials.

Vij testing positive for Corona virus has caused unnecessary panic among a section of the people. The hysteria and sensational reporting his health condition have led to fanning a narrative regarding alleged failure of the vaccine. This is not based on scientific reasoning, or any logical conclusions but more on hearsay and wild speculations. In fact, there is no cause for worry or panic either as the results of the trials will be known only after some weeks.

Till such time as results regarding all individual volunteers are compiled and analysed, nothing can be said definitively. Another point regarding the vaccine is that no vaccine in the world, till date, proves 100% efficacious in the entire population. There are many variables which need to be carefully studied and reports generated to say the final word.

Elsewhere, across the world, some very well-known political leaders have volunteered to have vaccine shots when TV cameras are around. The UK Prime Minister Boris Johnson has said that he will be one of the first to get a vaccine shot on camera. He is doing so to scotch any wild rumours associated with the vaccine the UK is about to start injecting to large parts of its population.

In the US, two former Presidents, Bill Clinton and Barrack Obama, have stepped forward to have themselves vaccinated. This is meant to generate confidence among the citizenry regarding the vaccination that is about to start in that country soon. The field trials of the vaccine in India are lagging behind by several weeks and there is no reason for any panic.