Hathras: 4 arrested were in touch with PFI members accused in Delhi riots 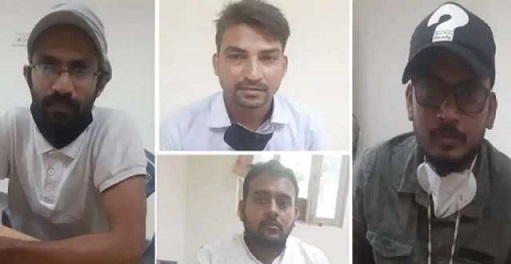 The four persons which included a Kerala journalist UP Police intercepted while they were on way to Hathras, all of whom are believed to be with Popular Front of India (PFI), were in touch with those PFI members who are accused in Delhi riots.

In a sensational report in Hindi daily Jagran, it is claimed that the four arrested persons were associated with the Campus Front of India which is an offshoot of PFI. The fellow PFI members these four were in touch with had earlier been interrogated and arrested for their alleged involvement in the Delhi riots.

The four arrested are Siddiqui (Muzaffarnagar), Alam (Rampur), Masood Ahmed (Bahraich) and Siddique Kappan of Malappuram, Kerala. They have been booked under stringent UAPA for planning and conspiring to cause riots in Hathras.

Incidentally, three office-bearers of PFI—Danish Ali, Mohammad Ilyas and Parvez Ahmad—could secure bail within days of their arrest. But the police is collecting evidence against them. These three are also accused of providing funds to Delhi riots mastermind, the AAP leader, now suspended, Tahir Hussain.

It may be recalled that Siddique Kappan is being represented in Supreme Court by senior lawyer and Congress leader Kapil Sibal.  Sibal had moved a habeas corpus but the SC has adjourned the plea and asked Sibal to approach the Allahabad High Court.