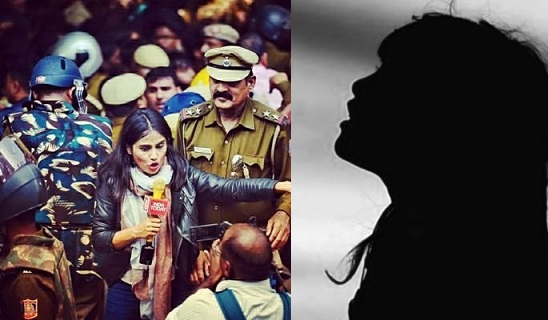 A telephonic conversation between a India Today journalist and the brother of the deceased Hathras victim, Sandeep has been accessed which is extremely damaging on how chaos and anarchy is engineered in our country as a section of media colludes with political parties much against ethics and norms.

In the alleged audio clip journalist Tanushree Pandey could be heard trying hard to convince Sandeep to send her a video statement of his father, which should claim that he was under immense pressure from the administration.

As can be heard, Tanushree Pandey is trying to get a specific statement from Sandeep who is rather non-committal.  He on occasions appears to toe the journalist’s line and on other occasions, claims his father was not very clear on whether he was pressurized at all!

Tanushree Pandey is heard telling Sandeep that she has come to know that an attempt is being made to blame the death of the sister on her family—apparently a fabricated insinuation intended to agitate the “subject” since nowhere such a charge has appeared in public domain. The only conclusion which could be drawn is that a specific agenda, a specific political narrative, is being whipped up in which certain section of media is shamelessly colluding.

Tanushree Pandey is heard saying: “Sandeep, please do one thing for me. And I promise that I will not move from here until your family has received justice…Sandeep, make a video of your father where he says, `Yes, there was a lot of pressure on me to issue a statement that I am satisfied…I want investigation because my daughter has died. And we were not even allowed to see her and she was buried.”

Pandey adds: “It will take only five minutes. Quickly make the video and send it to me only.” Further, Pandey is heard inciting Sandeep to speak out against Special Investigative Team (SIT). The brother, however, appears satisfied and says SIT was asking only relevant questions.

The brother, during the entire audio clip, appears reluctant and hesitant while the journalist tells him to consider her as his own sister—in a bid to get the video she wants.

In another conversation, between villagers and Sandeep, the brother is advised to spurn the offer of Rs 25 lakhs and that he shouldn’t accept till it’s hiked double to Rs 50 lakhs. The lady in the conversation is saying that some politician wants no “faisla” (outcome) should be reached. The names of Rahul, Manish Sisodia and Barkha Dutt also comes up in conversation.

Tanushree Pandey is alleged to have done a similar hatchet job during the anti-CAA protests in the Capital where she appeared to be “schooling” a Leftist JNU student apparently for a “fake” news of her own choice.agenda.