Hathras conspiracy: Attempt was to create a George Floyd moment in India 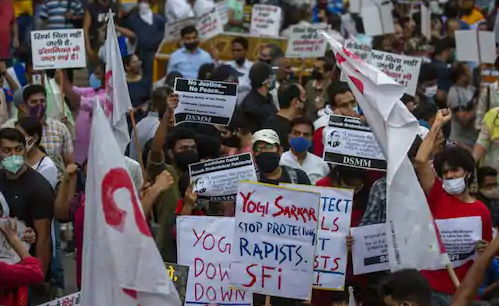 Deep conspiracy in Hathras appears to be the unofficial understanding of the Yogi administration in Uttar Pradesh if 19 FIRs filed by the UP police is anything to go.

Intelligence agencies have unearthed a global conspiracy to instigate riots in the wake of Hathras. A website “Justice for Hathras” came up overnight with the sole aim of throwing Uttar Pradesh in disarray and cause ethnic riots.

The website was intended to create a George Floyd moment in India, the flurry of violent protests that took place in the United States in recent times under #BlackLivesMatter banner. As per intelligence inputs, those masterminding the anti-CAA violent protests had created this website.

The content on the website include a detailed manual of the do’s and don’ts that the protestors should follow during the riots. It also includes details on how to instigate riots and escape accountability. It also includes details such as what they protestors should wear and bring with them to the protests. How to avoid being identified by the police and how to evade teargas is also mentioned.

Rioters were suggested not to put Vaseline, mineral oil on sunscreen that could trap the chemicals on their screen. Black, loose clothes were recommended to wear so as police fails to identify them.

The website, now shut, is under the government scanner now.

In the aftermath of the Hathras incident in which a young woman was attacked brutally and later died after a 12-day struggle, the police have listed sedition, conspiracy and promoting religious hatred in the main FIR filed in Hathras.

This was in the wake of Yogi Adityanath, chief minister of UP, claiming that the Hathras incident was exploited by those who were upset at the work his government was doing in the state.

“There is a deep conspiracy in Hathras, we will investigate the truth,” senior police officer Prashant Kumar said.

With opposition politicians visiting the woman’s family, the UP police has also filed cases for violation of distancing and other safety rules for Covid.