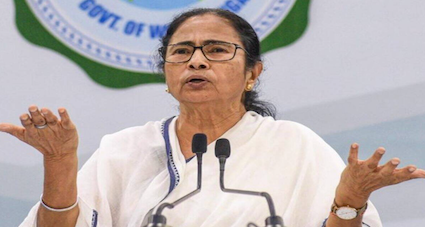 The Calcutta High Court gave a major setback to Mamata Banerjee-led West Bengal government after it dismissed its plea to recall or stay the order that directed the National Human Rights Commission (NHRC) to examine all cases of alleged human rights violations in post-poll violence in the state.

The court said it does not find any occasion to recall/modify or stay its operation and “Whatever references the state has made can be placed before the NHRC,” it added.

A five-judge bench comprising Chief Justice Rajesh Bindal and Justices IP Mukerji, Harish Tandon, Soumen Sen and Subrata Talukdar dismissed the plea, taking the several PILs into account that have alleged that post-poll attacks have led to displacement of people from their residences, physical assault, destruction of property and ransacking of offices.

Considering them, the bench directed the NHRC to form a committee to examine all complaints pertaining to the violence.

The bench said that the committee will scrutinise the complaints the NHRC has received or could receive, and submit a comprehensive report before it about the present situation, after “may be by visiting the affected areas”.

The court further warned the state government to provide logistic support to the panel, without creating any obstruction as “Such obstruction shall be viewed seriously, and may entail action under the Contempt of Courts Act besides others.”

The bench observed that in a case where the life and property of the residents of the state are allegedly in danger on account of post-poll violence, the state cannot be allowed to proceed in the manner it likes.

“It is the state government’s duty to control the violence in the state and build confidence amongst the citizens. The TMC government has been completely inactive over the alleged post-poll violence situation and is not taking any action against the complaints of violence,” the high court had observed.

Bharatiya Janata Party (BJP) leader Priyanka Tibrewal had alleged that over 200 persons have been unable to return back home owing to the continued threat to their lives.

Meanwhile, Advocate General Kishore Datta, who was appearing for the state, mentioned that he could not inform the court of the steps taken by the West Bengal government as he was not given a copy of the the West Bengal Legal Services Authority (WBLSA) report, which have received 3243 complaints till noon on June 10 pertaining to a range of issues such as looting, threats, assault, sexual assault, ransom demand.

Responding to this, Chief Justice Rajesh Bindal stressed that the NHRC had to be involved owing to the allegation that the police was not taking any action.

“We have merely asked NHRC to file a report on the present situation. Let them do it. What is the harm?” the Bench asked Advocate Datta.

Moreover, Justice Mukerji further questioned Dutta on how the State Human Rights Commission had not received any complaints related to post-poll violence even when the WBSLA officials have confirmed that the complaints were made and referred to the superintendent of police.

The case will be heard again on June 30.