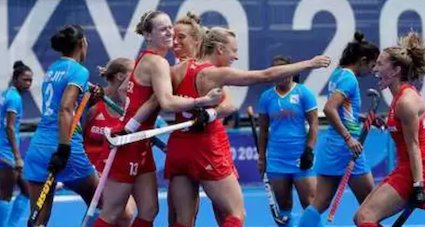 Indian women’s hockey team failed in its bid to win a bronze medal at Tokyo Olympics, losing to Great Britain 3-4 on Friday but their valiance and the spirit they exhibited throughout the competition has won everyone’s heart.

Indian women were valiant in their battle against Great Britain who were the Rio Olympic champions and were level 3-3 after three quarters before losing the battle.

Indian girls were reeling 0-2 down after conceding early in the second quarter but they fought back stunningly by scoring as many as three goals in six minutes to go into the half time with a 3-2 lead. But in the fourth quarter, Great Britain shot ahead and India were unable to equalise and force a shot-off.

Goalkeeper Savita Punia, famously being called as Save-ita, was inconsolable as she poured her emotions out after India missed the bronze medal by a whisker.

A brace from India’s star drag-flicker Gurjit Kaur and a goal from Vandana Katariya weren’t enough as India lost. Savita Punia was brilliant once again but it was heartbreak for the girls from India.

The men’s team rewrote history on Thursday as it claimed an Olympic medal after 41 years, defeating Germany 5-4 to win the bronze in an edge-of-the-seat play-off match.

And having already recorded their best-ever Olympic performance, the Indian women looked to double the nation’s joy on.

At the group stage India was thrashed 1-4 by Great Britain, who were the defending champions.

The Indian women’s hockey team wasted several chances in that match and could have made a closer match of it had they showed better finishing skills.

The difference between the two teams was that India had the better share of chances but Great Britain utilised more opportunities that came their way.

India secured as many as eight penalty corners in the match but converted just one. Great Britain too didn’t have great success rate from set pieces as they found the net just once from the six they earned.

The Indians would take a lot of confidence from their spirited performance against world no.2 Argentina in the semifinals even though they lost match 1-2.