Heroin worth Rs 1,439 cr seized from a Pakistani boat near Gujarat 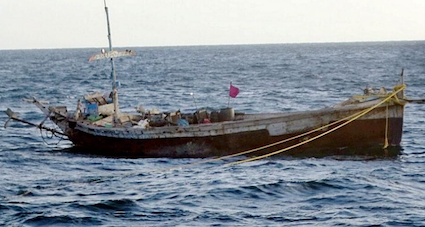 In a joint operation, the Indian Coast Guard and the Gujarat Anti-Terrorist Squad have seized a Pakistani boat with nine crew members on board in the Arabian Sea near Gujarat coast and seized over 200 kg heroin from the vessel.

The Pakistani boat ‘Al Haj’ was apprehended by the Indian Coast Guard officials when it entered the Indian waters. Based on the intelligence developed jointly with officers of Gujarat ATS, the Directorate of Revenue Intelligence (DRI) officials examined a consignment, imported by an Uttarakhand based firm at Kandla Port, the Ministry of Finance said in a statement.

As per the statement, the consignment arrived at Kandla Port from Bander Abbas port, Iran. The consignment, imported in 17 containers (10,318 bags), has gross weight of 394 MT and was declared as “gypsum powder”.

So far, 205.6 kg of heroin, valued at Rs 1,439 crores in illicit market, has been recovered. The detailed examination of the consignment is still undergoing at the port.

On the basis of the enquiry done so far, DRI has arrested the said importer under the provisions of NDPS Act, 1985 and he has been produced before the Hon’ble Court of Special Duty Magistrate, Amritsar on 24.04.2022. The Court has granted transit remand to enable the DRI officers to produce the importer before the jurisdictional Court at Bhuj.

Further investigation in the case is underway.