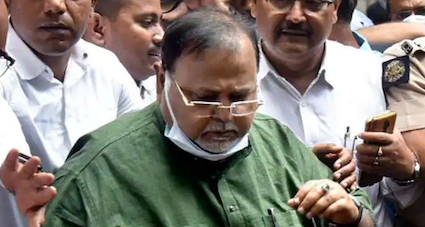 Stained ex-Trinamool Congress leader Partha Chatterjee has confessed to the involvement of the party high command in the School Service Commission (SSC) Scam, as IANS has reported.

During the course of interrogation, he told investigators that everyone in the TMC including top party leadership was privy to his activities. He alleged that fellow TMC members were aware that money was collected in exchange for providing government school jobs to intelligible candidates.

While speaking about the matter, an Enforcement Directorate official said, “He claims that he was just the custodian. He never asked for any money neither accepted any from candidates. There was a party diktat and he was following orders. He was supposed to sign documents prepared by others.”

“The money was also collected by others and sent to him. He had been instructed to keep the money in safe custody. Hundreds of crores were later taken away for ‘party’ use. Only a fraction of the sum was confiscated. This is what he has revealed so far,” the official emphasised.

Another official of the central agency informed that Partha Chatterjee has confessed to the involvement of other Departments in providing jobs via fraudulent means to ineligible candidates.

“People allegedly got railway jobs by paying money. He has also mentioned a certain office in Majerhat where these deals were struck. Partha Chatterjee claims that the party took so long to take a decision about his fate as other leaders were cleaning up their homes. Once this was over, they washed their hands off, leaving him to fend for himself,” the official emphasised.

Besides, Partha Chatterjee has also alleged that the top leaders of the Trinamool Congress visited the properties that he bought in the name of Arpita Mukherjee. He also said that the party need a front like an actress to stash the money.

The ex-TMC leader was arrested on July 23 after the Enforcement Directorate recovered Rs 21 crores in cash, jewellery and foreign currency of Rs 50 lakhs from the residence of Arpita Mukherjee, aide of Chatterjee.

He had allegedly helped 10 relatives of his bodyguard to secure jobs in different East Medinipur schools using ‘concocted and fabricated papers.’ Following allegations of corruption and impropriety, Partha Chatterjee was ousted from the Trinamool Congress.

Earlier, the TMC Minister was greeted with boos of “chor chor” outside AIIMS Bhubneshwar. Videos had emerged wherein the crowd gathered outside the hospital could be heard shouting ‘chor chor’ slogans as Partha Chatterjee was being wheeled into the hospital.