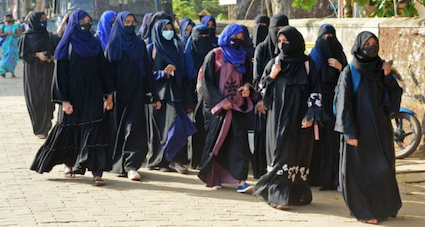 Hundreds of girl-students had boycotted the Class 12 exams in Karnataka, called PU II, in protest against non-wearing of Hijab in classrooms. As per Times of India, all of them would not get another chance to appear in the exams.

This was clarified by the government on Sunday, stating that the students marked absent during the examination will not get another chance.

Said BC Nagesh, education minister: “How can we even consider the possibility? If we allow students who boycotted the practicals for not being allowed to wear hijab to the exam even after the high court gave its interim order, then another student will come citing some other reason and seek a second chance.”

Practical exams carry a weightage of 30 marks out of the total 100 marks in board exams in Karnataka, with the balance 70 for the theory exams.

The Hijab controversy which began in January gathered steam as Islamist group Popular Front of India (PFI) and Campus Front of India stood in support of students and several writ petitions were filed in the Karnataka High Court.

However, Karnataka high court recently held that hijab is not an essential religious practice and dismissed all petitions.

The Muslim girls had filed a petition in High Court seeking permission to attend classes with hijab. They stated that wearing the hijab was their ‘fundamental right’ granted under Articles 14 and 25 of the Indian Constitution and ‘integral practice of Islam’.

The controversy spiralled as Hindu students in Karnataka styled with saffron scarves around their necks and protested against Muslim girls continuing to wear hijab to the college.

Tensions also prevailed at some educational institutions in Udupi, Shivamogga, Bagalkote, and other parts, as stones-pelting and violence were reported from various parts of the state.