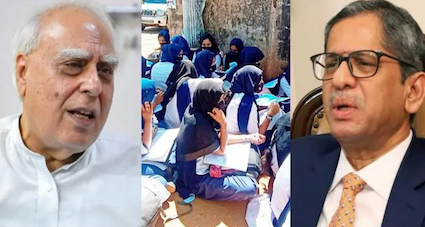 Congress’ Kapil Sibal waded into the Hijab Row of Karnataka on Thursday wanting the case to be shifted out of Karnataka High Court to a Supreme Court bench, headed by Chief Justice of India, NV Ramana.

However, Supreme Court has refused to intervene!

Demanding that the matter be referred to a 9-judge bench of the Supreme Court, Sibal observed: “This deals with what’s happening in Karnataka.

It’s spreading all over the country. In the meantime exams are two months away”. While the senior advocate asked the matter to be listed, the CJI declined to say, “The problem is now if we list the matter, the High Court will never hear it. Wait for one or two days”.

Elaborating on his argument, the senior Congress leader added, “Problem is, schools and colleges are closed. Girls are being stoned. It’s spreading across the country”.

However, the bench emphasised that it was not making any observations pertaining to the merits of the case but made it clear that the HC should get more time to hear the case. Thus, it declined to urgently list the matter mentioned by Sibal.

The HC is hearing a petition filed by 5 students of the Government P.U. College for Girls, Udupi. They demanded the right to attend classes while wearing a Hijab citing constitutional provisions and a direction to the effect that it is an “essential practice” of Islam. Opposing this plea, the Karnataka government pointed out that the petitioners and parents were fully aware of the uniform system in the P.U. College at the time of admission. Clarifying that it is not against any religious practice, it stated that the purpose of the uniform is to maintain equality among the students and maintain dignity, decorum and discipline in the classroom.