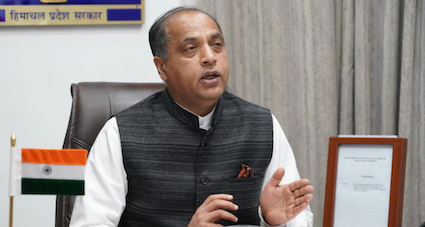 Himachal Pradesh Chief Minister Jairam Thakur has said that the government will look to implement the Uniform Civil Code in the state.

With elections due soon, Thakur said the government will examine the UCC before taking a final decision.

Speaking about the implementation of UCC, CM Jairam Thakur said that the Himachal Pradesh government will not hurry the decision.

Calling it a “good step”, Thakur said, “We will not make haste. We will examine it and see what can be done. Himachal will try to implement UCC.”

With this Himachal Pradesh now follows Uttar Pradesh and Uttarakhand in making the call.

Earlier last week, Uttarakhand Chief Minister Pushkar Singh Dhami had vowed to implement UCC in the BJP-ruled state. Having said that state government unanimously arrived at this decision, CM Dhami mentioned that Uttarakhand will act as an example to the rest of the nation. His announcement had come two days after MNS President Raj Thackeray demanded that PM Modi should formulate a UCC across the country.

“During the first Cabinet ministers meeting, we unanimously decided that Uniform Civil Code will be implemented across Uttarakhand. We have decided to formulate a committee in this regard, and the committee will be responsible to make a draft of UCC regulations. We hope that all states bring UCC,” the Uttarakhand CM had said while sealing all speculation and clamour with regards to highly-anticipated UCC laws in the state.

On Saturday, Uttar Pradesh Deputy CM Keshav Prasad Maurya had proclaimed that the Yogi Adityanath administration is working towards implementing UCC in the state. Maurya noted that the Common civil code is necessary for the citizens of the country.

On 18 November 2021, the Allahabad High Court stressed that the Uniform Civil Code is mandatory. The single-judge bench of Justice Suneet Kumar was hearing a batch of 17 petitions pertaining to protection sought by interfaith couples. In one of these pleas, one of the parties said that they converted to the religion of his/her partner and thus apprehended a threat to their life, liberty and wellbeing.

While allowing the pleas, Justice Kumar observed that UCC cannot be made “purely voluntary” owing to fear expressed by members of the minority community. Referring to a Supreme Court verdict, he asked the Centre to constitute a committee for implementing Article 44 of the Constitution. A part of the Directive Principles of State Policy in the Constitution, Article 44 reads, “The State shall endeavour to secure for the citizens a uniform civil code throughout the territory of India”.