Hindi, Sankrit no; Urdu yes in Jharkhand for job exams 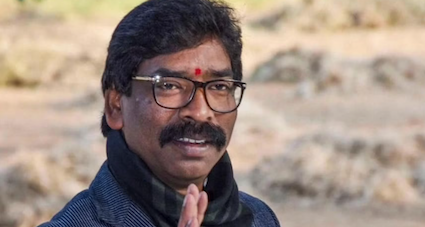 The Hemant Soren-led Jharkhand government, which often remains in controversy, is currently facing massive backlash from the Bharatiya Janata Party (BJP) for its new employment policy which is “discriminatory” in terms of language and region.

The state administration has cleared proposals which remove Hindi and Sanskrit from the languages paper list but retains Urdu in the same for the examinations conducted by the Jharkhand Staff Selection Commission (JSSC) for grade III and IV government jobs.

The student has to mandatorily clear the qualifying exam which is set in Hindi and English. Besides that, the new examination pattern also requires candidates to clear a language paper from a list of 12 including tribal languages besides Bangla, Odiya and Urdu.  These marks will be added to the total marks obtained. However, Hindi and Sanskrit which were there earlier have been dropped from the list

Jharkhand BJP spokesperson Pratul Shahdeo said the new policy discriminates against Hindi and people from the Hindi heartland and seeks to appease the minority community.

“Earlier, subjects like Hindi, Sanskrit and Urdu were also in the list of main language papers. But the new policy has kept Urdu but dropped Hindi and Sanskrit. How is Urdu a regional language but Hindi is not? It smacks of appeasement. By the new policy, the government is discriminating against people living in certain regions of the state,” he told reporters.

The new policy also replaces the two-stage examination conducted by the JSSC with a single-stage competition. Moreover, the government has also made it mandatory that the candidates from non-reserved categories of the Jharkhand government must have passed class 10th and class 12th exams from the state. So, if the reserved category gives education in another state to their children, it is fine for the Jharkhand government, but the general category people cannot send their children outside the state, otherwise, they will not be eligible for JSSC jobs.

“This rule discriminates against moolvasis (original inhabitants of Jharkhand) who fall in the general category,” said Shahdeo. He said that the BJP is mulling options, including that of mounting a legal challenge, against the new policy.

Meanwhile, Hemant Soren’s Jharkhand Mukti Morcha has denied the charges saying the new policy was in the interest of locals including the tribals, dalit, backward classes and the original inhabitants of the state. “There should be no confusion on this,” JMM principal general secretary Supriyo Bhattachary stated.