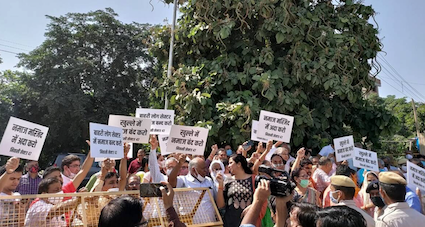 The protest against offering Namaz in the open continues in Gurugram gained momentum after Hindu outfits strictly opposed the offering of Namaz at these public places from December 10 onwards.

The district administration and the Gurugram police have decided to deploy personnel on a large scale at the 20 designated namaz sites to prevent a law-and-order situation on Friday.

“We are keeping a close watch on the situation, and no one will be allowed to take law and order into their own hands and disturb peace in the city,” said Yash Garg, deputy commissioner, Gurugram.

Members of Sanyukt Hindu Sangharsh Samiti, an umbrella organization of Hindu right-wing groups protesting against namaz in public places, said they had given a month to the administration to stop the practice of namaz being offered on public land.

“Our only submission to the district administration was that prayers not be held in the open. But Muslims continued to do so. Now the situation is getting tense and despite an assurance that they will not do so, Muslims are still using open spaces and land which belongs to area residents,” said Kulbhushan Bhardwaj, legal adviser of the Samiti.

Rajiv Mittal, the Hindu Sangharsh Samiti spokesman, said that they are not against “Muslims offering namaz” but against “namaz being held in open spaces without permission”. He claimed the permission granted at 37 places in Gurugram was for the holy month of Ramadan only.