Hindus are in minority in many districts of Assam: Himanta Sarma 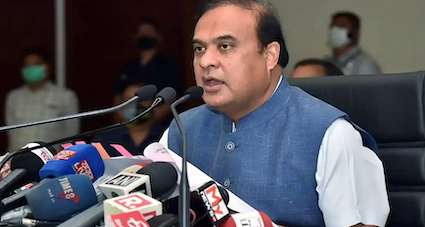 Assam chief minister Himanta Biswa Sarma wants the definition of religious minorities to be decided on the basis of each district.

The Assam’s maverick leader said Hindus are hopelessly in minority in many districts of Assam and NRC should be re-implemented in the state.

The Assam government could become a party to the ongoing case in the Supreme Court based on a PIL filed by BJP leader Ashwini Upadhyay. The PIL seeks directions for framing guidelines which can identify minorities at state level.

He also said, “There are several confusions. A person who has received an ST scholarship is also getting minority, OBC scholarships. Now such issues are being discussed in Supreme Court. Expecting (SC) to specify minority definition soon, so that we get to know who they are.”

As per the chief minister, Hindus are even less than 5,000 in some districts.

As per last census of 2011, Assam’s minority Muslim population is little over 33%. However, in nine districts of the state, Muslims are in majority and Hindus are in minority like Christians, Sikhs, Buddhists and Jains. The Centre has recently submitted before the Supreme Court that the states can consider granting Hindus ‘minority’ status if the community is not in a majority within their jurisdiction.

AIUDF MLA and the general secretary of the party Aminul Islam said on Tuesday that his party would definitely move Supreme Court if the Assam government files any petition seeking the re-verification of the NRC.