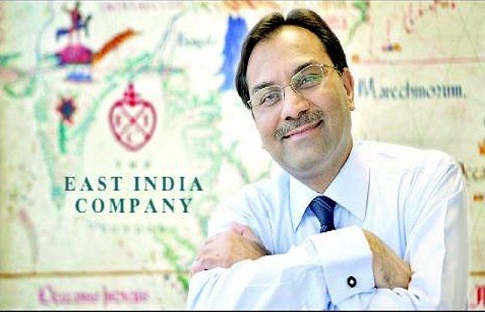 We all know that East India Company was a precursor to formal British rule in India. Well, nowadays its owned by an Indian industrialist, Sanjiv Mehta.

Neither the East India Company nor British empire of today bears any resemblance to their might from the 18th to 20th century; the Clives, Hastings, Churchills are all gone in the dustbin of history. Still, for symbolic value, an Indian owning East India Company, should bring a smirk on the face of millions of Indians.

“No matter the cost” Sanjiv Mehta had uttered to himself once he knew that the Company’s shares were up for a sale. Mehta knows the history of his country, and he is acquainted with the background of the Company and its forceful trade policies and repressive regime on the Indians.

In 2005, Sanjiv Mehta had created a new brand in the luxury tea, coffee and food business. He opened the first store of the East India Company in Mayfair, London.

“A company which once owned India is now owned by an Indian … a feeling of the empire striking back,” says Sanjiv Mehta.

On September 8 this month, Sanjiv Mehta earned the permit to trade under the cost of arms and seal of the Company. He additionally has the options to mint coins, including a Mohur gold coin that was last minted in 1918 in British India.

It was in the year 1600 when East India Company was established. It was given the charter to do business in Asia by Elizabeth 1, the queen of Britain.

In its initial forays, the Company imported spices, tea, silk and other products of value from India to Europe.

It handed over the reins formally to the British empire after the 1857 War of Independence by the Indians.

In the mid-2000s, Mehta bought a majority stake in several companies that had been renamed or newly incorporated with names similar to the historical East India company.  Mehta gradually bought stakes in these company over 18 months, buying out the last investor in 2006.

Mehta took a year’s break from his other businesses and travelled the world to learn about East India Company’s heritage. In 2010 he relaunched the business as luxury retail space.

By 2011, Mehta had invested around 20 million pounds in the new business.

Sanjiv Mehta was born to a Gujarati family in Mumbai. His grandfather Gafuchand Mehta lived in Belgium in the 1920s and had begun a diamond trading business. Sanjiv’s father, Mahendra, was born in Antwerp in 1933 but brought his family back to India in 1938.

Mehta graduated from Mumbai and then went on to Los Angeles to study. He had begun doing his father’s business in 1983 and shifted to London in 1989 where he now resides with his wife Amee, son Arjun and daughter Anoushka.