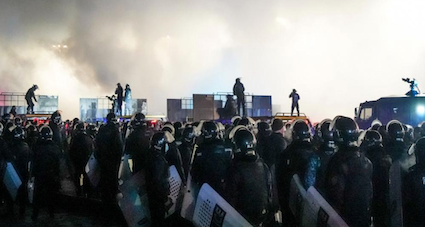 Is the United States up to its dirty tricks in Kazakhstan and is there a lesson for India to learn from the turmoil gripping the Central Asian country?

For the indifferent, let’s first get to the brief on roiling Kazakhstan of now.

Kazakhstan fell into chaos overnight. The spark was the doubling of liquefied gas prices. Soon it spread to entire nation—from Almaty to the Caspian Sea ports, passing through Astana (now Noursoultan).

The central government reduced the price of gas in response. But now the demonstrators were asking for lower food prices (Repeal Farm Laws to MSP now, anyone?), an end to the vaccination campaign, lower retirement age for mothers with many children etc.

It rattled Russia, the northern neighbour. Much of Kazakhstan’s 20 million population is Russian; its language has an official status; the two countries conduct strategic space cooperation; and have military-technical ties. The country is an important link in the Belt and Road Initiative (BRI) which has Russia on the same page as its originator, China.

Russia understood the timing of these demonstrations. First the United States made a chaotic withdrawal from Afghanistan which weakened the southern flank of the CSTO (Collective Security Treaty Organization). Russia already is facing a war-threat from NATO on its western front in Ukraine; the chaos could spread along an axis stretching from Scandinavia to Crimea; and the timing of this widespread chaos at its borders is to force Russia to backdown from a collective West in a meeting this week.

Russia moved quickly. It invoked CSTO which brings together the armed forces of six former USSR republics, including Kazakhstan. It sent a peacekeeping force; total foreclosure of the territory, disappearance of the internet, blindness of the satellites; electro-magnetic jamming, and deployment of specialised forces in fifth generation hybrid asymmetric warfare. It’s a shadow of futuristic conflict which could sprout regularly in Asia, as it happened in Hong Kong recently and from which New Delhi has temporarily backed down strategically, vis-a-vis protesting farmers.

Washington has never ceased to dream of the rupture of the strategic Moscow-Beijing axis. Kazakhastan suits them perfectly for the United States has a huge penetration in this uranium-rich country. American companies manage a large part of Kazakhstan’s oil production which accounts for 44% of state revenue. Since 2003, Kazakhstan has been organising joint military exercises with NATO every year. Besides from 2004-2019, the United States sold weapons worth millions of dollars to Kazakhstan.

The US’ footprint in Ukraine or in Poland or in Belarus in internal conflicts are unmistakable. It supported “rebels” in Syria. It’s fingerprints were visible in a war between Azerbaijan and Armenia. Now is the attempt to reduce Russian influence in another of its backyard, the Central Asia.

It remains to be seen how this pans out. Whether Russia’s influence gains or loses ground in its neighbourhood. They have had faced a lot of deflating “Colour Revolutions” since Vladimir Putin has come to power. They lost in Urakine, won in Belarus and now Kazakhstan is another test. It’s paramount for their sovereign foreign policy.

Sure, India is watching. It’s seeing the same “kit” in operation which roiled it for last year and a half during the farmers’ protest. In EU asking for Kazakhstan to “Respect the Right of Peaceful Demontrators”, New Delhi could draw a parallel from its own experience. Protestors wear the cloak of “peaceful demonstrations” but in essence it’s total lawlessness, violence and mob attacks. People get out on the streets on abstract demands such as “We Want Democracy” even if they can’t define it. And then there are absolute demands—such as complete repeal of farm laws—knowing that the government won’t back down. But in Modi’s case, he did so to avoid the trap.

Such chaos are “internal” but managed by “external forces to confuse the population of its true nature. They get sucked in into the noise of “human rights” and “freedom” and can’t see the wolves in sheep’s clothing.