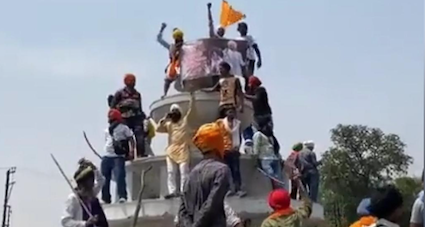 The Patiala clash of Friday, between two groups one opposing and one in support of Khalistan, has taken a grave turn with videos emerging of a Kali Temple being stoned, Hindu shopkeepers being attacked, their shops being vandalized by what is said to be a pro-Khalistan mob.

As per Rajesh Kehar, president of the Hindu Raksha Samiti, in a media report, the clash between the two groups took place quite far from the Kali Mata Temple which was subjected to a horrific attack.

It is claimed that the attack on the temple was a well-planned conspiracy as most of the attackers didn’t appear to be local.

Rajesh Kehar, the President of Hindu Raksha Samiti, told OpIndia, “This bandh is not against Harish Singla, but because of the attack on the temple by Khalistan supporters. All Hindu organisations of Patiala have taken this decision together.”

In the police complaint, Rajesh Kehar has elaborated on the moment when the attack on the Kali Mata Temple took place.

I was in my office; I heard the slogans of Khalistan Zindabad. I ran outside, where I saw some Nihang Sikhs pelting stones and attacking the temple building and the Langar Bhawan. They had sticks and other weapons. They were raising anti-Hindu slogans,” Rajesh Kehar said to OpIndia.

A video of the same has also surfaced on social media, which shows that the Khalistani mob had attacked the temple and looted shops as they brandished swords and sticks. The police officers can be seen trying to stop these attackers, however, the Khalistani Sikhs continue to attack the shops around the Kali temple.

Hindu organisations meanwhile have given a call for Patiala Bandh, demanding the arrest of Khalistani supporters who attacked the Kali Mata Temple on Friday.

In the wake of the bandh, the district officials have imposed an 11-hour curfew, besides snapping mobile internet services in Patiala. According to the government order, all mobile internet and SMS services will remain suspended between 9:30 am and 6:00 pm.

Meanwhile, Punjab Chief Minister Bhagwant Mann has summoned a high-level meeting of officers following the attacks on the Hindu temple.

Incidentally the Kali Mata Temple in Patiala was subject to attack only in January this year.