How about a man who knits and also wins an Olympic gold!: Watch 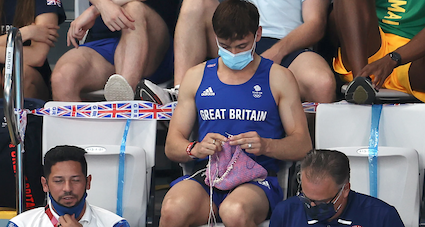 The British diver Tom Daley, who won gold alongside Matty Lee in the men’s synchronized 10-meter platform diving’ event delighted his fans with his other love, when he was spotted knitting while cheering on competitors in the women’s three-meter springboard diving final in Tokyo Olympics.

He took to his Instagram handle where he mentioned his love for knitting, saying that it’s “his secret weapon”. In a video posted on his Instagram account (@madewithlovebytomdaley) on July 27, he said, “The one thing that has kept me sane throughout this whole process is my love for knitting, crochet and all thing stitching. I want to thank my followers for actually following along.”

He also showed off “a little cosy pouch” which he had knitted for his gold medal “to stop it getting scratched”. The pouch is emblazoned with Britain’s flag on one side and the Japanese flag on the other.

Oh this? Just Olympic champ @TomDaley1994 knitting in the stands while watching the diving. ðŸ§¶ pic.twitter.com/o17i6vsG2j

It all started when images of the 27-year-old Daley, wearing his Team GB kit and obligatory mask, was seen wielding needles and purple wool in the Tokyo Aquatics Centre watching the ‘Women’s 3m Springboard Final.

His Instagram page has 100,000 followers and is a platform for Tom’s many woolly creations.

Meanwhile, Daley is currently preparing to qualify for the prelims of the ‘Men’s 10m platform diving’, which is scheduled to take place on August 6 at 11:30 am IST (Indian Standard Time).