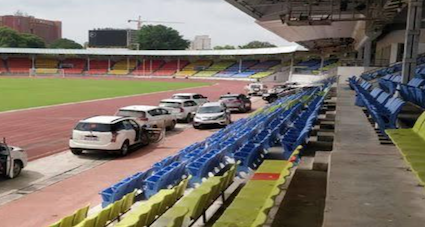 He said he was very sad to see such disrespect for sports and sporting ethics in our country. “As it is, we are lacking in sufficient sports facilities in our country. All the sports centers need proper care,” he added.

The MVA leaders were at the sports complex to review the work of the under-construction International Sports University.

Maharashtra sports department reacted to the accusation and apologized. It also clarified that only Sharad Pawar’s vehicle was allowed to park there so that he doesn’t have to walk, and permission was given to park on the concrete road near the track. However, some other vehicles also came on the track along with Pawar’s vehicle.

“Vehicles were allowed to be parked on cemented tracks as Pawar Sahab had an issue with his leg. It was allowed so that he doesn’t face problem in walking,” Maharashtra Sports Commissioner Om Prakash Bakoria tweeted.

BJP IT cell head Amit Malviya also launched a scathing attack on MVA leader and said, “At a time when Indian athletes are preparing for Olympics, Sharad Pawar, former IOA president and other MVA ministers, in a brazen display of arrogance, run their cars on the tracks of Shivchhatrapati Sports Complex (Pune), because they didn’t want to climb two flights of stairs.”

The BJP MLA  Siddharth Shirole questioned what would have happened had a cricket ground been turned into a parking lot. “Don’t get me wrong.. I love Cricket but imagine the uproar if SUV’s drove and parked over the centre pitch of an International Cricket ground..That is what the MVA Leadership did…disrespected & destroyed an international athletic track and with it the morale of our athletes,”