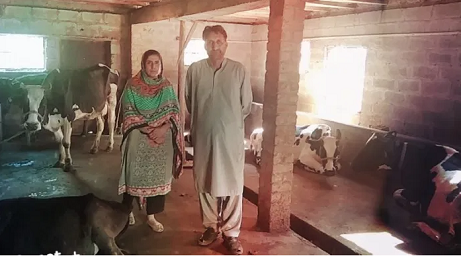 Samia Sadaf is a candidate in District Development Council (DDC) election from Drugmulla segment in Kupwara district. She is wife of Abdul Majeed Bhat, who had gone to Pakistan, like hundreds of other youths, which are described as “misguided youths” in media in Kashmir.

Samia Sadaf grew up in Pakistan and married Majeed, an Indian, who had crossed over to the other aide. She came back to India with him via the Nepal route, according to records available in the public domain. Her husband was arrested on reaching Kashmir and is now settled in his ancestral village Tikir in Kupwara district.

The couple have started a dairy business and also are small- time entrepreneurs in their rural surroundings. They have three sons and a daughter, according to Kashmirlife, which has a story about her, titled “A Bride’s Battle”.

The opening line, rather the opening blurb, of the story says: In order to fight for the rights of 350 women who married Kashmiri boys on the other side of the Line of Control (LoC), one of Kupwara’s ‘Pakistani’ brides is in the contest for the upcoming DDC polls.

If she is still a Pakistani, how did she become a candidate in election in India? Did she travel to India on a Pakistani passport? When did she surrender it and get an Indian passport? What was the process she followed?

These questions are relevant because there are hundreds of “Pakistani brides” living in dozens of villages in Kashmir. They entered India, illegally, along with their husbands, all Kashmiris who had crossed over to Pakistan. The story mentioned that in Kupwara district alone, the number of such brides is over 75.

The story also talks about a protest the “Pakistani brides” held in Kupwara on December 4 (Friday) holding placards. These placards carried slogans like “We want justice”, “We request to provide travel documents”, and “We want travel documents for going back to Pakistan”.

(Pakistani brides in Kashmir who want to go back to Pakistan: Image courtesy Hilal Shah)

In 2010, a rehabilitation policy was announced by the Indian government headed by Manmohan Singh. Under this policy, four routes for ingress into India were recognised. These were: Salamabad-Uri (called Srinagar-Muzaffarabad bus route), Chakan Da Bagh (Poonch-Rawalakote route), Indira Gandhi International Airport and Attari-Wagah route in Amritsar.

Incidentally, Nepal was not a recognised route of surrender for the so-called “misguided youths”. Most Kashmir-centric political parties had put pressure on the Centre to recognise the Nepal as a fifth route. This was firmly turned down and as such hundreds of Kashmiri youth returned to India to “surrender”.

Not one among these hundreds could be given the benefits announced under the rehabilitation policy. Their wives and children entered India and stay here till date illegally. Of course, they have not been jailed or prosecuted under the relevant provisions of the law. Dealing with those who enter into territory of India illegally and without proper travel documents.

The issues surrounding Samia Sadaf—Pakistani origin, presently living in India, whether a legitimate citizen or not and if yes, how—are questions which would swirl in the air. In coming hours, Deputy Commissioner of Kupwara would have a lot of queries to parry.

Three years ago, far reaching changes took place with regard to the then state of Jammu and Kashmir. Its special status vanished, as did...