How Pieter Friedrich was built up by Khalistani conspirators 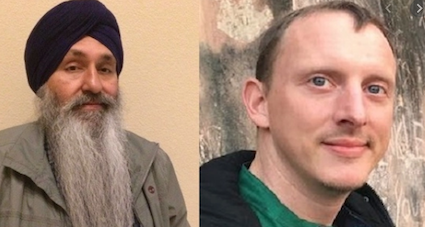 In a recent development under the ‘toolkit’ shared by child activist Greta Thunberg, Disinfo Lab, an OSINT (Open Source Intelligence) initiative has made some strong revelations in their report about Pieter Friedrich whose name has surfaced in the conspiracy.

According to security agencies, Friedrich has been the front and unsuspecting face of a Khalistani conspiracy, which has roots outside India.

This is not the first time Pieter Friedrich has come under the Delhi Police radar. His association with an ISI in 2006 became the cause of suspicion.

The reports claim that Friedrich was struggling with financial problems when Bhajan Singh Bhinder, a known Khalistani recruited him as part of his disinformation campaign against India. Bhinder is also associated with the K2 (Kashmir-Khalistan) conspiracy.

There were constant efforts to build Friedrich credibility on social media platforms, multiple books were published in his name and various organisations were also established. One of the prominent one is the Organization for Minorities of India (OFMI).

It is to note that OFMI has links to Khalistani groups as one of its leaders Bhinder is infamous Khalistani who was investigated for trying to procure arms for the Khalistan movement in 1992. This was revealed in One East Bay Express report of 2003. The report stated, “Bhinder allegedly said he was looking for one ton of C-4 plastic explosive “to start with.” The declaration says the unnamed agents then showed Bhinder and Singh a collection of machine guns. They were evidently looking for something with more firepower, namely M-16s, AK-47s, detonators, night-vision goggles, mobile communications equipment, remote-control equipment, grenade and rocket launchers and, for good measure, Stinger missiles.”

“Bhinder allegedly said the weapons would travel via yacht to Pakistan. They would then move overland by truck into India, where members of the Free Khalistan movement would receive them. Bhinder, the declaration said, would pay half of the money when he got the weapons and the other half when the shipment arrived in India,” it continued.

At the same time, while in the US, Bhinder and his gang was also involved in a major trans-national drug trafficking network, and a DVD piracy network. In order to fund their drug network, they managed to take control of one of the most prominent Gurudwaras in the US (Fremont Gurudwara), after a bloody fight within it. Fremont receives millions of dollars in contribution from devotees every year.

Disinfo Lab also revealed that OFMI majorly receives its funding from Pakistani influencers and media networks. Pakistani Cabinet Minister Fawad Choudhary, who had recently claimed responsibility for the Pulwama terrorist attack, is one of the funders of the OFMI.