How you pay and escape quarantine in Mumbai: Maharashtra lurches into another bad optics 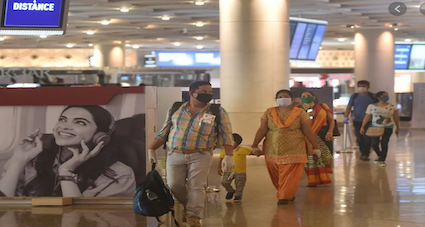 It seems there is no end allegations of corrupt governance in Maharashtra today. A state which is reeling under the Covid-19 onslaught, with 57,000 cases reported on Sunday, would forever be struggling to stem this tide for as a Mid-Day report claims, the BMC officials (Brihanmumbai Municipal Corporation) are charging money from international passengers at the airport to let them skip the compulsory seven-day quarantine.

The BMC officials are reportedly charging Rs 10,000-Rs 12,000 at Mumbai international airport to allow passengers to escape the seven-day institutional quarantine. This when the mutant strains of Covid-19 virus from the UK, Europe, Middle East and South Africa are ravaging the country, more so Maharashtra.

The SoP (Standard Operating Procedure) by the BMC stipulates that international passengers above 65 needing support, pregnant women, parents with children below 5 years could be permitted home isolation. All other flyers must undergo institutional quarantine for seven days.

But not so if you could grease the palms of a few BMC officials, as per the report. First, after clearing immigration, passengers are shown a list of hotels marked for institutional quarantine.

Passengers who wanted to bypass the mandatory institutional quarantine were instructed to choose a certain West Inn hotel. Based on their choice, passengers were bracketed in a group of 6-7 and asked to sit in each bus. The news report says that barring masks, neither the driver nor the civic officials had PPE suits on them.

(The passengers walking out in Emerald Inn after checking in: Image courtesy Mid-Day)

The Mid-Day unit followed the Innova car which went to Ulwe, some 60km from the airport, and stopped near the Om Anand Residency. Here the passenger got down with his luggage. It later came to light that the man had arrived from a Gulf nation and lived in flat number 102.

The newspaper report claims it wasn’t an isolated incident. Another day, another bus, and Mid-Day found out the same sequence of events happened with “willing” passengers, duly escorted to residences instead of mandatory seven-day quarantine.

The report includes a conversation between a BMC official and a Mid-Day reporter who wanted one of his relatives flying from abroad to escape the mandatory quarantine. The BMC official, one Vasant, asked the reporter to pay Rs 10,000 to a certain Dipali who is running a hotel to avoid the quarantine.

When the reporter asked if the passenger would face any problem, since BMC officials visit hotels daily to check on the mandatory quarantine, Vasant revealed that BMC officers visit the hotel and collect money. The Hotel and BMC people have complete setting, he said.

Vasant further said he had been facilitating such an “escape” for passengers for a long time. Mid-Day claims Dipali charged its reporter Rs 11,000 for getting her sister out of mandatory quarantine.

BMC has refuted the allegation, saying that they have a mechanism in place to check if the passengers are staying in the hotel.

However, the collector of Mumbai suburban district, Milind Borikar said that BMC is giving out wrong information. He said that his staff only segregates international passengers arriving in Mumbai. He alleged that the entire process is controlled by the BMC and they had no role to play in it.

Masurkar also denied that the list of hotels is kept with the Collector’s office staff at the airport. “No, no. He is giving you wrong information because we are not at all concerned with the quarantine facility; our staff is working there only to segregate passengers.”