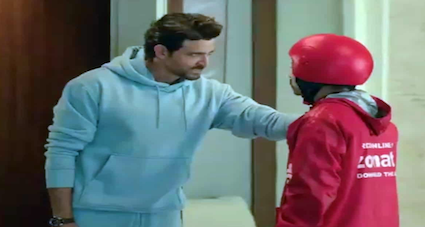 Food delivery giant Zomato has been at the receiving end over its newest ads featuring Bollywood celebrities Katrina Kaif and Hrithik Roshan.

Not just that; the actor then asks him to wait for a selfie (instead of tipping him) but here comes the twist; the delivery guy couldn’t wait any longer and hurried back to his bike because he had another delivery to make.

Katrina’s ad was also on the same line where she also made the delivery guy wait but again the delivery boy couldn’t wait due to other deliveries.

Both the ads did not go down well with most viewers. Zomato, which is already facing acute criticism for its treatment of the staff, faced backlash for the messaging the same in this ad too.

However, Zomato released a statement addressing the issue. In the statement, the company highlighted the ads were conceptualised six months ago before any social media conversation around gig worker salaries and working hours started.

Zomato also asserted that they highlight delivery partners as heroes, that one should talk respectfully to them and raise the level of dignity associated with them.

“We believe that our ads are well-intentioned, but were unfortunately misinterpreted by some people,” Zomato said in a statement.

“Having said that, we have been intently listening to all the chatter about gig workers and all the problems associated with this part of the economy. As a company, we have always acknowledged whenever we’ve come short, and we understand that you expect more and better from us,” the company added.

They also mentioned that they will soon release another blog explaining why they think their delivery partners are fairly compensated for the work/time that they put in.