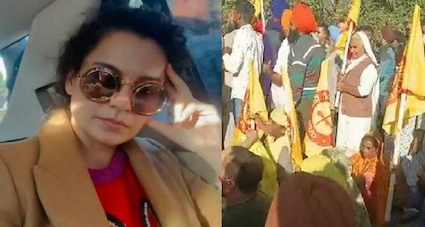 Bollywood actor Kangana Ranaut was stopped by a mob protestors calling themselves farmer in Bunga Sahib, Sri Kiratpur Sahib on Chandigarh Una Highway. The mob was gathered in large numbers to stop the actress and demanded an apology over her remarks on the Sikhs.

Sharing series of videos on her Instagram account, she wrote “As I entered Punjab, a mob has attacked my car…. they are saying they are farmers.”

Calling the situation unbelievable, she said that there would have been mob lynching if the police wouldn’t have arrived at her rescue.

“My car has been surrounded by a mob who are calling themselves farmers and are attacking me. They are hurling abuses at me and threatening to kill me. shame on these people.”

However, later on she managed to escape the mob and left the place, and also thanked Punjab Police and CRPF for their support

Meanwhile, in an Instagram story, Kangana Ranaut emphasised, “No one asked me for an apology and I never apologised. Why should I apologise, for what? For genuine love and concern for the people of Punjab? No, I will never do that…The entire conversation with the women in the mob is in the story and even on all media platforms… Don’t spread rumours, please. I always supported farmers and therefore spoke in favour of farmers bill and I will continue to do so.”