I have been met with violence in this country: Rahul Gandhi 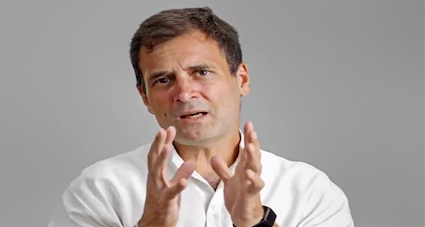 Senior Congress leader Rahul Gandhi has said that the country has committed violence against him.

“I have been beaten with shoes. I have been subjected to extreme violence in this country. When I introspected why is this happening to me, I got an answer that the country wants to teach me a lesson,” Gandhi said in a speech he made during an event organised to launch the book ‘The Dalit Truth-Battles For Realising Ambedkar’s Vision’.

Trying to project himself as an altruist leader who never sought power, despite the fact that he hightailed it to Wayanad on the prospect of losing Amethi, Gandhi postulated that it was never his intention to grab power and was thankful for the nation for showering him with love and respect.

“Desh ne sirf mujhe pyar nahin diya, desh be mujhe jhoote bi maare. You cannot understand, jitni zoron se, jitni hinsa se, is desh ne mujhe mara hai, peeta hai (But the country has not just given me love, it has thrown shoes at me. You cannot understand how hard, with what violence, I have been hit). I thought why is this happening. I got the answer. The country wants to teach me, the country is saying that you learn and understand. It doesn’t matter even if it pains you, learn and understand,” Gandhi said.

The remarks made by Gandhi came a day after he had predicted violence and chaos in the country and had accused the BJP of dividing the nation, two months after he fanned separatist sentiments when he claimed India is not a country but a union of states.

After that Rahul Gandhi said that this will lead to violence, by saying, “when this pain will be felt, violence will happen”. He said that people may not agree with him, but will see this situation after 2-3 years.