I stand by my words on Gandhi, says a defiant Kalicharan Maharaj 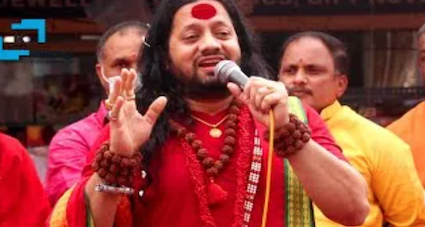 Controversial Hindu seer Kalicharan Maharaj, who was arrested for using expletives against Mahatma Gandhi, continues to stand by his statements and has no regrets.

Speaking to reporters on Sunday, the Akola-based Maharaj, who is out on bail, said, “I stand by my statements (against Gandhiji). I hate the man who called Chhatrapati Shivaji Maharaj, Guru Gobind Singh, and Rana Pratap ‘corrupt’. My statements were well thought and I have no remorse.”

The religious leader was arrested in December and charged with sedition in a ‘hate speech’ case after he made derogatory remarks about the Father of the Nation in his speech. He was sent to judicial custody by the court following which he applied for bail.

Speaking at the Dharam Sansad in Raipur, the Hindu seer claimed that Muslims had captured Pakistan and Bangladesh via politics and were aided by Mahatma Gandhi. Thanking his assassin Nathuram Godse, Kalicharan blamed the administration for being mere puppets (of the Muslims). He also stated that Hindus were not prepared to riot as police were slaves of the administration, government, and politicians.

“Islam captured nation via politics. They captured Pakistan and Bangladesh in front of our eyes. That *expletive* Mohandas Karamchand Gandhi destroyed everything. My salutations to Nathuram Godse ji for klling him. Oppression is necessary to control these people (Muslims), otherwise, they become cancer,” Kalicharan had said.

Later, Pune police too filed an FIR against Kalicharan Maharaj for a hate speech he allegedly delivered on December 19 at the Shivpratap Din program.

Later, he released a video standing by his previously made statements, and offered salutes to Gandhi’s assassin.