If AIMIM gets 50 seats, they won’t take oath in the name of Bharat: Patra 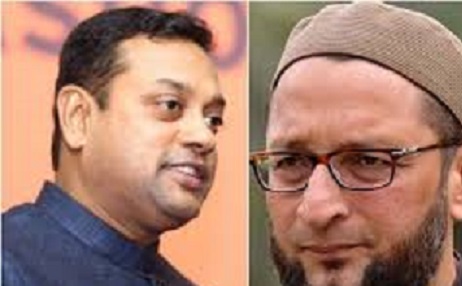 There was a controversy in the Bihar legislative assembly when an AIMIM legislator said that the draft for oath in Urdu should use the word “Bharat” and not Hindustan. The issue took a different turn on Tuesday when BJP spokeman Sambit Patra said if AIMIM got 50 seats in the assembly (as against five it scored), they will refuse to take oath in the name of “Bharat”.

Patra’s reaction was in response to a controversy that had started in Patna on Monday when an AIMIM MLA said that the correct word was “Bharat” and not “Hindustan” as used in the oath. He said the word mentioned in the Constitution was Bharat, and not Hindustan.

The BJP leader said that with only five seats in Bihar assembly, the party has a problem with saying Hindustan. If it had won 50, it will not be saying Bharat either. Patra’s comment were made while he was seeking votes for the BJP in Hyderabad for GHMC.

The demand for using the word Bharat, in place of Hindustan, was made by AIMIM legislator Akhtarul Iman, Bihar unit president of his party. He had won from Amour constituency in Purnea district. Protem speaker Jitan Ram Manjhi allowed him to use the word Bharat.

Iman said that in whatever language we read the Preamble of the Indian Constitution, the word mentioned is Bharat. He asserted that he had no problems with the word Hindustan as he has grown up reciting Iqbal’s poem “Saare Jehan se accha, Hindustan hamara”.