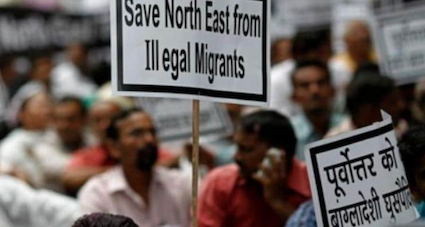 MHA has asked the National Investigation Agency (NIA) to probe the “well-designed larger conspiracy to exploit the illegal migrants and also to destabilise the population ratio and demographic scenario of the country”.

According to the MHA’s preliminary findings, Kumkum Ahmed Chaudhury who supervises illegal migration in association with Sahalam Laskar of Jammu and Raju Ali, a Pakistani national, has been identified as two of the kingpins of the racket. Both are Bangladesh-origin Muslims who had settled down in Assam before moving to Bengaluru and Jammu respectively.

They not only organize the illegal entry of Rohingyas and Bangladeshi Muslims, but also arrange their transportation to various cities so that they settle there by forging documents such as PAN cards, Aadhar numbers, driving licences and ration cards.

According to the IB reports, Rohingyas are trafficked into India mostly through the unfenced and porous parts of the border in Tripura, Meghalaya and Bengal.

“There is a very well-organised human trafficking ring patronised by Islamist organisations like the Bangladesh Jamaat-e-Islami and Jamaat-ul-Mujahideen Bangladesh (JMB). These organisations facilitate the transportation of Rohingyas from the refugee camps in Chittagong to the Indo-Bangladesh border. Elements of the trafficking ring in Bangladesh then help them cross the international border, from where Bangladesh-origin Muslims take over to arrange shelters, logistical support and forge or fraudulent identity documents from the Rohingyas,” said an officer of the MHA’s Counter-Terrorism & Counter-Radicalization (CTCR) Division.

The Central government has also maintained that illegal immigrants including Rohingyas pose a threat to national security and that there are reports about some Rohingya migrants indulging in illegal activities and which is why the NIA has been asked to conduct a thorough probe.

In an affidavit filed in the Supreme Court in September 2017, in response to a petition filed by two Rohingya immigrants seeking refugee status, the home ministry said “Continuance of Rohingyas’ illegal immigration into India and their continued stay has serious national security ramifications and threats.”

They had even mentioned that as many as 40,000 Rohingya Muslims had entered India illegally and were staying in various parts of the country.

Indian government has clearly stated that as India is not a signatory to the UN Refugee Convention thus it rejects the argument that deporting Rohingyas violates the principle of refoulement, sending refugees back to face danger.