Imran Khan is all but over as Pakistan’s prime minister: Die is cast 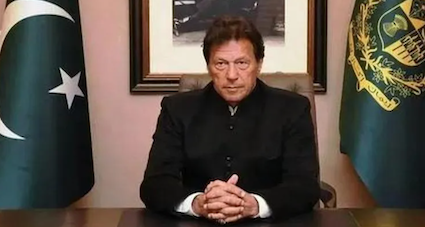 Pakistan PM Imran Khan will address his country on Wednesday evening, PTI senator Faisal Javed Khan revealed as his government is set to lose the majority.

Already, sources revealed that Law Minister Faroogh Naseem and IT Minister Syed Aminul Haque of MQM have tendered their resignation.

If MQM-P indeed dumps PTI, the opposition’s strength will swell to 177 seats- 5 more than the required number of seats to win the no-confidence motion against Khan.

Meanwhile, Imran Khan has also called an urgent Cabinet meeting in a last-ditch attempt to save his government.

As per sources, Cabinet members and the leaders of allied parties will be shown the “secret letter” which is “proof” of the alleged foreign conspiracy to dislodge his government.

The meeting is scheduled to start at 2.30 pm (Pakistan time), sources added.

The Pakistan PM had referred to the aforesaid letter during his massive rally at the Parade Ground in Islamabad on March 27.

Speaking at a function earlier in the day, the 1992 World Cup-winning captain revealed that he would share the secret letter with senior journalists. He said, “No-confidence vote is a legitimate democratic method. This crisis is a foreign-imported crisis. This is a conspiracy against Pakistan from abroad. This conspiracy has started since people started controlling Pakistan via one telephonic call. They would demand things from us on one telephone call against our national interest. Those people are not used to having leadership in Pakistan that takes decisions in the national interest.”

After completing three and a half years in power, the Imran Khan-led government is under fire over the surging inflation, increasing debt, misgovernance and mishandling of foreign policy which is reflected in the stalling of CPEC projects and US President Joe Biden’s snub.

On March 8, Pakistan’s main opposition parties filed a no-confidence motion against Khan. While PTI has only 155 members in the 342-member National Assembly, it has secured the support of 4 PML(Q), 3 GDA, 1 BAP and 1 AML MPs, taking the total tally of the ruling coalition to 164.

Moreover, the ruling party has sent a show-cause notice to 13 PTI MPs who openly expressed displeasure with the government’s functioning, thus indicating that they are also likely to vote against the Pakistan PM.

Signalling his lack of trust in his own party’s MPs, Imran Khan directed them to abstain from voting during the no-confidence motion failing which they will be liable for disqualification.

The opposition has already named Shehbaz Sharif as its PM candidate.