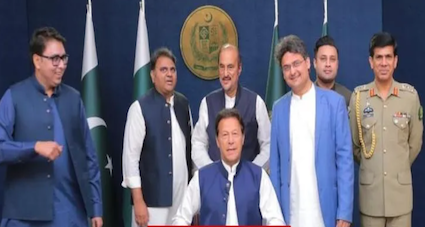 Pakistan Prime Minister Imran Khan, in a rapid turn of events today, asked the President to dissolve the national assembly and announced fresh polls after the last-minute dismissal of the no-trust motion. The matter will be heard by the Supreme Court

In a short address to the nation, Imran Khan asked the people of Pakistan to “Get ready for elections”. “The conspiracy to take down this government has collapsed,” he added. The assembly has been dissolved and the election will be held in 90 days.

The Supreme Court has taken suo motu notice of the issue and has decided to constitute a larger bench. The opposition, which has also appealed in court saying the ruling party has acted unconstitutionally, sat on the floor of parliament in protest.

The no-trust motion against the Pakistan Prime Minister was dismissed by the Deputy Speaker Qasim Suri, who termed it against the Constitution and rules of Pakistan.

“Government has violated constitution. did not allow voting on no confidence motion. The united opposition is not leaving parliament. Our lawyers are on their way to Supreme Court…” tweeted Bilawal Bhutto Zardari, the leader of the opposition PPP (Pakistan People’s Party).

The cricketer-turned politician had earlier hinted he still had a card to play. “I have a plan for tomorrow (Sunday), you should not be worried about it. I will show them and will defeat them in the assembly,” he had said.

He had also refused to resign, promising to “play till the last ball” and “look the traitors in the eye at the assembly”.

But this morning, he skipped the assembly session as his supporters roamed the streets in response to his call for a peaceful protest against what he said was a “conspiracy” hatched outside Pakistan to unseat him.

Mr Khan has accused the US of meddling in Pakistan’s affairs and alleged that the opposition was conspiring with Washington to remove him because he would not take the side of the US and Europe on global issues against Russia and China.

Mr Khan’s Pakistan Tehreek-e-Insaf party effectively lost majority in the 342-member assembly last week when a key coalition partner said its seven lawmakers would vote with the opposition. More than a dozen lawmakers from the ruling party also indicated that they would cross the floor.

The opposition is headed by the Pakistan Muslim League-N (PML-N) and the Pakistan Peoples Party (PPP) – two usually feuding dynastic groups that dominated national politics for decades until Khan forged a coalition against them.

Maulana Fazal-ur-Rehman, the President of the Pakistan Democratic Movement, has called Prime Minister Imran Khan a fraud after the deputy speaker Qasim Suri dismissed the Opposition’s no-confidence motion and Khan dissolved the Assembly.

“The entire country knows that No-Confidence Motion against PM was rejected using a letter and has pushed the country to the political crisis. It never happened in Pakistan,” Rehman said.

“Imran Khan left behind dictators. He hasn’t lost only but ran away after losing. He tried to stick to PM’s house without caring for anything. His act is beyond madness.  We repeat and alerted people that he is not capable to be PM of Pakistan and he used illegal means to run away from No-Confidence Motion,” he added.

“Political parties never run away from elections, the people are the real power of political parties. Why are they afraid to go public, why are they shedding tears? If there are lion cubs, then come and contest us in the election,” says Law Minister Fawad Chaudhry.

Addressing a press briefing, PTI leader Sheikh Rasheed claimed that he had asked Prime Minister Imran Khan about implementing an emergency. He also claimed that he has vacated the office and had moved to his old residence.

He said that as per the law, Imran Khan will remain in power for 15 more days.

“Inshallah we will surprise the government before evening and we are sure that the Supreme Court will give the right decision,” JWP chief Nawabzada Shahzain Bugti said. His party was earlier in coalition with Imran Khan’s PTI.

“Mark their faces. This is the group, the mafia, that has attacked & abrogated the constitution of the Islamic Republic of Pakistan. They all must be tried under article 6,” Maryam Nawaz Sharif tweeted.