India and Congress have a crack now: Manish Tewari 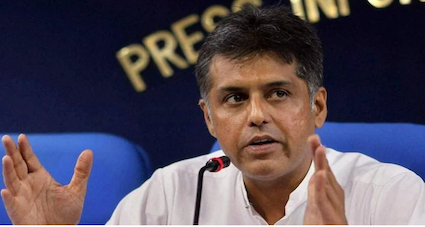 As the Congress reels under resignations of senior leaders, party MP Manish Tewari has said that “self-introspection” is needed and that a “crack” seems to have appeared between India and Congress.

Mr Tewari was among the 23 top Congress leaders who wrote to party chief Sonia Gandhi two years ago, seeking organisational changes. Two leaders of the block, now referred to as G-23, have spoken out against the party leadership in the past week.

Speaking to news agency ANI, Mr Tewari said, “Two years back, 23 of us wrote to Sonia Gandhi that the party’s situation is worrying and should be taken seriously. Congress lost all Assembly polls after that letter. If Congress and India thought alike, it seems either of them has started thinking differently.”

Referring to a meeting of the Congress high command two years ago, the MP from Punjab’s Anandpur Sahib said, “A crack seems to have appeared in the coordination between India and Congress that existed since 1885. A self-introspection is needed. I feel that had the consensus of the meeting at Sonia Gandhi’s residence on December 20, 2020 been executed, this situation wouldn’t have arrived.”

Tewari refused to comment on Azad’s scathing resignation leader to the Congress chief, but said that it is “laughable” that “people who don’t have the capacity to fight a ward poll” are giving “gyaan”.

“Don’t want to go into the merits of Azad’s letter, he would be in the best position to explain… But strange that people who don’t have capacity to fight a ward poll, were chaprasis of Congress leaders, are giving gyaan about the party. It is laughable,” he said.

The former Union minister said that he has been a Congressman for 42 years and does not need a “certificate”. “We do not need any certificate from anyone. I have given 42 years to this party. I have said this before. We are not tenants of this institution (Congress), we are members. Now, if you try to push us out, that is another matter,” he said.

Tewari’s no-holds-barred remarks come at a time when the Opposition party is facing a massive crisis as veteran leaders leave, accusing the high command of not heeding their advice and going by the suggestions of “sycophants”.

In a blistering attack, Azad targeted Rahul Gandhi in his resignation letter to Sonia Gandhi. He blasted Rahul Gandhi for “childish behaviour”, “glaring immaturity” and for letting a “coterie of inexperienced sycophants” run the party.

The Congress is “comprehensively destroyed” and has reached a point of no return, he said, and slammed a “remote control model” in which Sonia Gandhi is “just a nominal figurehead” while important decisions are taken by “Rahul Gandhi or rather worse his security guards and PAs (personal assistants)”.

Besides Azad and Sharma, the party’s national spokesperson Jaiveer Shergill also severed his ties with the party, taking a jab at the Gandhis. “I’ve been seeking time from Rahul Gandhi, Sonia Gandhi & Priyanka Gandhi Vadra for more than a year, but we are not welcomed in the office,” he said.