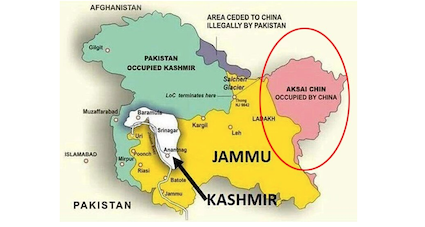 Three years ago, far reaching changes took place with regard to the then state of Jammu and Kashmir. Its special status vanished, as did the J&K Constitution which had been written by its Constituent Assembly between 1951 and 1957. It was also announced by Union Home Minister Amit Shah on August 5 that the state will cease to be on October 31, 2019, under the Reorganisation Act. Instead, two Union Territories (UT) were carved out, the UT of J&K and the UT of Ladakh.

Going a step further, new maps showing outlines of the territories of the two newly carved out UTs were released on November 2, 2019. Interestingly, Mirpur and Muzaffarabad were two districts shown as part of the UT of J&K. So, this new UT had two additional districts on paper, which are presently under the illegal occupation of Pakistan. This means that instead of 20 districts which it has, J&K UT has 22 districts now, officially, as per government records.

It is not clear though whether these districts have been placed in the Jammu region or Kashmir. It bears mention here that most of the Pakistan occupied territories lie in the Jammu region. In his first term, Prime Minister Narendra Modi’s government had declared that the territories occupied by Pakistan were to be called Pakistan Occupied Jammu Kashmir (POJK), and not Pakistan Occupied Kashmir (POK) which was the prevalent term used till then.

The map of UT of Ladakh, drawn by the Surveyor General of India, issued by then President Ram Nath Kovind, showed areas of districts of Leh, Kargil, Gilgit, Gilgit Wazarat, Chilas and Tribal Territory of 1947. Other than Leh and Kargil districts, most areas have remained under Pakistan occupation right since 1947-48 war. Aksai Chin, in Chinese control, is also shown as Indian territory in the new maps. In the Reorganisation Act, marking out these areas as Indian territories was one of the most salient points in showing cartographic intentions (not the realities) harboured by India.

Though Aksai Chin is uninhabitable and has no resources, it is strategically very significant as it connects Tibet and Xianjiang. During the 1950s, China built a road connecting Xinjiang and western Tibet. Of this 1,200 km of road, 180 km ran through areas claimed by India. One peculiarity of this remote region is that it is easily accessible to China and very difficult for India as it lies towards northern (other) side of mighty Karakoram mountains.

The Indian side did not know about the Chinese road till late 1957 and the next year, in 1958, it was shown in the new Chinese maps. The construction of this road was considered as one of the triggers for the Sino-Indian war of 1962. In an era gone by, Prime Minister Jawaharlal Nehru had said that Aksai Chin was “part of the Ladakh region for centuries’’. Going a step further, he had asserted that this northern border was a “firm and definite one which was not open to discussion with anybody’’. The new map of Ladakh is a reiteration of this stance.

Incidentally, it bears mention here that several campaigns were undertaken by Gulab Singh, a vassal king of Lahore Sikh Durbar, from 1836 to 1841-42 to subjugate vast areas lying in Ladakh area. India’s claims to whole of Ladakh rest on some conquests of that era. It was only in March 1846 that Gulab Singh became sovereign Maharaja of Jammu & Kashmir territories following the Amritsar accord with the British.

It is now clear that the new map of Ladakh UT proved to be a red flag for China, our gigantic neighbour, and angered its leadership no end. So much so that in early summer months of 2020 (April-May), within six months of unveiling of new Ladakh map, the People’s Liberation Army (PLA) chose to hold its positions in eastern Ladakh in a manner that confrontation was only a matter of time. On June 14/15, 2020, the Chinese and Indian troops clashed leading to the deaths of 20 Indian soldiers in Galwan. The Chinese have not disclosed the number of fatalities on their side though till date.

The Chinese PLA troops are still entrenched in those chilling heights of above 15,000 feet, for most part glaciated cold desert. The changes brought out in Jammu & Kashmir, of which Ladakh was also a part before November 2019, were for sure a catalyst, if not the prime cause, of the dance of Dragon we are witnessing in Ladakh now.

This is not to say that India should not have changed things so drastically in J&K. Nor does it mean that the Chinese would have given up their “salami slicing’’ (capturing territories without firing a bullet) of earlier years had these changes were not introduced.

For us as a nation, China at our doorsteps everywhere, be it in far east Arunachal Pradesh, Sikkim, Uttarakhand, Himachal Pradesh and Ladakh, is the most serious challenge we are facing today. Fortunately for us, our long time western adversary Pakistan is down in the dumps so much that it has hardly been able to contribute to our challenges. No, the challenge from Islamabad has not vanished but it has not been able to act as an effective force multiplier of China!

Pakistan has barely been able to keep its head above swirling waters of default till now. Its condition was not very different when it had an international playboy turned politician Imran Khan at the helm as Prime Minister or Shehbaz Sharif now. These economic dire straits for Pakistan is really a godsend for India as it could have fomented enough trouble on borders for us.

China seems to be mad with anger and wants to keep India off-balance as it grows closer to the US. However, the Indian market of over 135 crore people is too attractive a proposition for China to ignore. That alone has been the reason for the dragon deciding not to escalate any further. Of course, with Chinese investments in the much touted China Pakistan Economic Corridor (CPEC) estimated at over $60 billion in 2020, India’s redefining Ladakh puts that pile in jeopardy.

Of late, new narratives about India’s claim on Pakistan Occupied Jammu Kashmir (POJK) are emerging in public domain in our country. Pakistan responds to these claims by usual India-bashing on different platforms like Organisation of Islamic Countries (OIC), the UN and a couple of friendly nations like Turkey. China, however, cannot be equated with Pakistan in any sphere and is likely to continue to trouble us in the foreseeable future.