India has its own Swadeshi answer to Twitter: It’s ‘Tooter’ 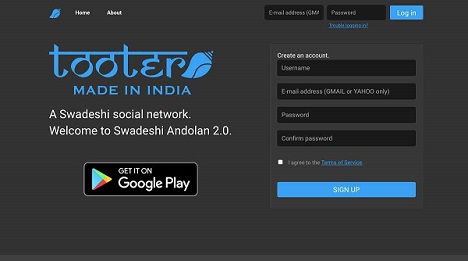 India it seems has its own Swadeshi answer to Twitter now: It’s called Tooter.

Just as you do on twitter, you could post “toots”, make lists, have news feed, follow people. It seems to already have some heavyweights on its stable: Prime Minister Narendra Modi has already signed with a verified account and so have home minister Amit Shah, defence minister Rajnath Singh and Sadhguru. The BJP also have an official account on Tooter.

Tooter is uncannily twitter. It even has the blue colour one sees on twitter. It has a design and user interface. And a blue conch as its symbol.

Interestingly, Kimboh, the Indian answer to WhatsApp, launched by Ramdev’s Patanjali, also has conch as its icon. It hasn’t had a great run so far though.

The about page of Tooter says:

“We believe that India should have a Swadeshi social network. Without one we are just a digital colony of the American Twitter India Company, no different than what we were under the British East India Company. Tooter is our Swadeshi Andolan 2.0. Join us in this Andolan. Join us!”

Tooter appears to have been active since July, but it looks like the platform has gone viral on Twitter and that’s how people are talking about it.

Tooter also has a Pro version. One could upgrade it by paying Rs 1,000 per year.