India hits out at UN: Don’t be selective on “religionphobia” 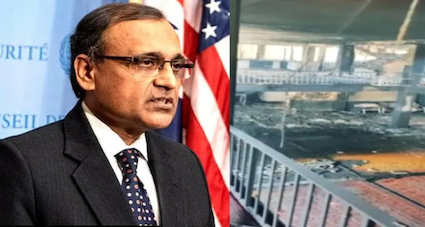 Nearly two days after a Sikh gurudwara was attacked in Kabul, India reacted strongly at the UN General Assembly on Monday and asked the UN member states to stop being selective in combating “religiophobia”.

While speaking at the international forum, India’s Permanent Representative to the UN Ambassador T S Tirumurti, denounced the recent attack and termed it a “coward” and “wicked” step by those who masterminded the attack.

During his speech, Tirumurti stressed it is time UN member states should also condemn hatred against non-Abrahamic religions including Buddhism, Hinduism and Sikhism and advised the members to stop being selective in combating religiophobia.

Notably, India’s staunch stand at the United Nations meeting came as two people were killed and seven others were injured during an attack on Karte Parwan Gurdwara in Afghanistan’s national capital. A day after the attack, Islamic State Khorasan Province (ISKP) claimed the responsibility and said it was conducted as revenge for the alleged insult of Prophet Mohammed by a former BJP spokesperson.

Meanwhile, reacting to the Kabul attack incident, India’s Permanent Representative to the UN Ambassador called the 193-member UN body to stop condemning the attacks on one or two religions only and asked the members not to ignore other religions such as Hinduism, Buddhism and Sikhism. According to Tirumurti, this attitude will contribute to the rise in religious hate.

“India has time and again emphasised that combating religiophobia can never succeed if it continues to be exclusionary and remains restricted to one or two religions only, while completely ignoring the rise in hatred and discrimination against non-Abrahamic religions including Buddhism, Hinduism and Sikhism,” Tirumurti said.

“The Gurdwara Karte Parwan was attacked, desecrated and damaged. We condemn in the strongest terms this cowardly, dastardly attack where lives were tragically lost. It’s time the UN member states condemned hatred against non-Abrahamic religions as well and stop being selective in combating religiophobia,” he added.

Further, Tirumurti underscored that the real motive of the UN meeting would not be fulfilled unless and until the United Nation work collectively and promote all religions. He affirmed there cannot be double standards on religiophobias if the UN truly want to combat hate. He noted that India, on several occasions, raised its voice to combat hate and violence not just against Abrahamic religions but against all religions, including Sikhism, Buddhism and Hinduism.

Tirumurti recounted how terrorists inundated the Sikh gurudwara in Afghanistan where 25 Sikh worshippers were killed in March 2020. Also, he highlighted the destruction of Hindu, and Buddhist temples in several other nations, and called the members of the United Nations to condemn these religious attacks too. “Unfortunately, we continue to witness a rising trend in hate speech. This was particularly evident during the COVID 19 pandemic,” he added.