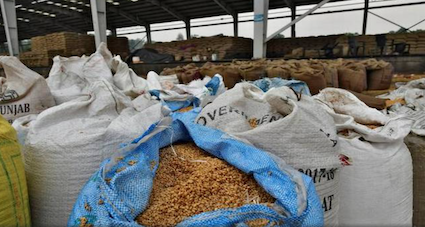 Pakistan Prime Minister Imran Khan has allowed India to transport 50,000 tons of wheat to Afghanistan via the land route through Attari-Wagah border. According to reports in most Pakistani newspapers, this has happened as interim foreign minister of Afghanistan Amir Khan Muttaqi had made a request to this effect earlier in the month. The Pakistan PM had then assured Muttaqi that he would “favourably consider’’ the request.

The modalities for the transportation may be worked out between the Indian and the Pakistani side in the near future. It is most likely that loaded Indian trucks would be allowed to reach pre-designated unloading points in Afghanistan via Pakistan territory. They are likely to be provided escorts by Pakistan’s security agencies during their journey.

Besides allowing the transportation of wheat via land route, Pakistan will also facilitate the return of Afghan patients stranded in India. It is pertinent to point out here that wealthy Afghans routinely opt for Delhi as a preferred destination to get medical treatment. Some corporate hospitals have dedicated desks for handling Afghan patients. When the Taliban took over charge in Kabul on August 15, many Afghans were in Delhi and they could not reach back home because of a variety of factors.

Incidentally, the Indian government had made the offer of giving 50,000 tons of wheat as humanitarian aid to Afghanistan last month. However, for a long time, there was no positive response from the Pakistan government as it neither said yes, nor no, to the Indian proposal. In fact, it does not want any meaningful contacts to be established between the Taliban government and the Indian side.

Barely a fortnight ago, Pakistan National Security Advisor Moeed Yusuf had described India as a “spoiler’’ (in Afghanistan). This was on the eve of a meeting hosted by Indian NSA Ajit Doval in New Delhi in which eight nations participated. In Pakistani newspapers, the move was sought to be painted as a magnanimous gesture, with Herald Tribune saying it was happening “despite simmering tensions and suspension of trade with India’’.

Several senior civil and military officers were part of the meeting where the Indian offer and Afghanistan’s request was discussed threadbare. “The development is significant given the current state of bilateral ties between Pakistan and India and keeping in mind that Pakistan also does not allow a two-way trade between Afghanistan and India,’’ a report said.

It is a sort of one-way traffic between India and Afghanistan as Islamabad only allows Afghanistan to export its goods through the Wagah border to India. That also means that no Indian goods can be imported into India via the land route. Indian medicines were earlier available in Afghanistan markets but these had to be imported through third countries, via air route.