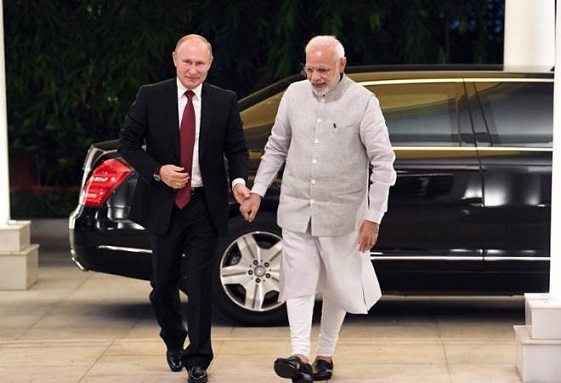 India could be having a formal arrangement with Russia on sharing defence logistics, including access to military bases for both, as per a report.

The Russian president Vladimir Putin is expected in India for an annual summit later this year and it’s believed the agreement would be inked on that visit.

This would enable both India and Russia for their warships to gain access to each other’s mutual ports and economic zones to refuel and pick up supplies.

India, incidentally, has similar arrangements with the United States, France and Australia while discussions are on with Japan.

The proposed agreement would enable the Indian Air Force to deploy aircraft for joint exercises. Significantly, the agreement could have a certain number of troops deployed in each other’s country.

It would enable Russia to gain facilities at Indian ports like Vishakhapatnam and Mumbai. Similarly, India could use Russian airbases and ports, including one in the part of Arctic under Russian control.

This could put India in crosshair with the United States which has a number of sanctions in place against Russia. But Washington would have to be sensible on the matter since India depends on its military supplies and spare parts on Russia for decades.

For example, on its recent visit to Russia, defence minister Rajnath Singh reportedly sought supply of spare parts and equipment, including bombs and missiles, procuring new MiG-29 and Su-30 fighter aircrafts for India.

India’s dependence on Russia could endure for decades as some systems, like fighter aircraft, tanks and multiple rocket launchers are still part of India’s arsenal.