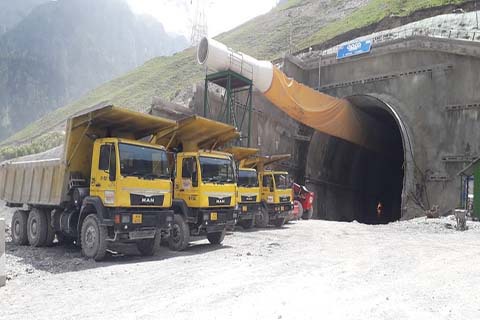 Chief Secretary of Union Territory of Jammu and Kashmir B V R Subramanyan has said that work on Z Morh tunnel will be completed by June-end next year. He was reviewing the progress of different road projects undertaken by National Highway Infrastructure Developed Corporation Limited (NHIDCL) on Monday.

Regarding Jozila tunnel, ahead of Z Morh tunnel on Sonamarg-Kargil road, he said that this would take another six years. It was expected to be completed by June 2026 only.

When both the tunnels are completed, round the year connectivity to Ladakh from J&K would ensue. Presently, work on Z Morh tunnel has been stalled for some time due to a host of reasons.

It is, however, to be taken up on “war-footing” now, an official said. The Z Morh tunnel involves construction of a 6.5 km long tunnel, a 6-km approach road, two major bridges and one minor bridge. The project would cost Rs 2,379 crore and is very vital strategically.

It envisages construction of a 14.15 km tunnel, 18 km approach road, 18 available protection dams etc. The construction of this tunnel is a major engineering challenge located as it is in very treacherous terrain. Those who have driven on Srinagar-Jozila-Kargil-Leh highway vouch that driving in this extreme area tests driving skills as also temperament.

The Chinese posturing in forward areas of Ladakh has added urgency to completion of these infrastructure projects. So far, Ladakh remains cut off from the mainland during several months in winters.

As such, the troops stationed in Ladakh are provided supplies during winters through aerial route using heavy-lift IL-76 aircraft. Newer Globemaster aircraft also make sorties to Leh during winters. However, maintenance of supplies through aerial connectivity remains a logistical nightmare due to bad weather for the armed forces. Besides, the costs are also prohibitive.

Most of the supplies to Leh garrison during winters are done from Zirakpur near Chandigarh. The troops stationed in Kargil and Leh travel by air from Palam in Delhi also.

Incidentally, the Rohtang tunnel on Manali-Leh axis is likely to be functional in a couple of months and prove to be a boon for troops.