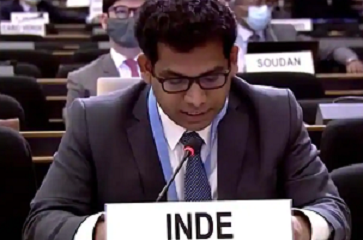 India took Turkey to cleaners, as well as Pakistan and the Organisation of Islamic Cooperation (OIC) at the 46th session of the Human Rights Council for their remarks on India’s internal affairs.

On Tuesday, India asked Turkey to refrain from commenting on the internal affairs of India and develop a better understanding of democratic practices. It was in response to Turkey picking up the Jammu and Kashmir issue.

The potshot was aimed at Recep Tayyip Erdogan, Turkish president, who is a strongman, accused of rigged elections and clampdown on opponents. He even survived a coup a few years.

Pawan Badhe, first secretary, Permanent Mission of India in Geneva, delivered India’s right to reply: “We reject the reference made by the OIC to the Union Territory of Jammu and Kashmir which is an integral part of India. The OIC has no locus standi to comment on the internal affairs of India. The OIC has allowed itself to be misused by Pakistan to subverse its own Agenda. It’s for the members of the OIC to decide if it is in their interests to allow Pakistan to do so.”

Slamming Pakistan, the Indian diplomat said, “It has become habitual for Pakistan to malign my country with false and fabricated narratives for its self-serving malicious purposes.”

“Neither India nor others deserve this unsolicited lecture on human rights from a country that has consistently persecuted its ethnic and religious minorities, is an epicentre of terrorism, has the distinction of providing pensions to individuals on UN Sanctions list and has a Prime Minister who proudly admits training tens of thousands of terrorists to fight in Jammu and Kashmir,” he said.