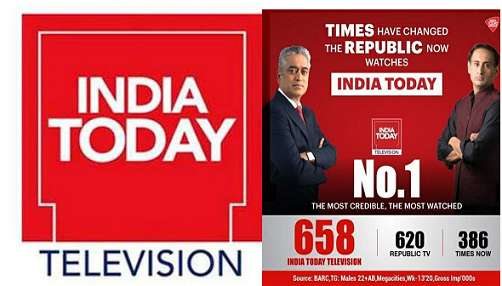 India Today was made to pay a fine of Rs 5 lakhs by the BARC (Broadcast Audience Research Council) disciplinary council for the inexplicable “buoyancy” in viewership in Mumbai and Bangalore, it was claimed in a report today.

The report quoted a show-case notice sent to TV Today network regarding viewership malpractice on April 27, 2020 but the response of TV Today network, who is a subscriber of BARC, wasn’t found satisfactory by the disciplinary council.

This appears to confirm the claim of Arnab Goswami who has alleged that the FIR filed against viewership malpractices indulged by TV networks didn’t include his channel Republic TV but rather TV Today network which owns Aaj Tak and India Today magazine.

As is known, the Mumbai police commissioner Parambir Singh had gone into an overdrive yesterday claiming that they had busted the malpractices run by a few channels, including Republic TV, which improve TRP (Target Rating Point), run by BARC, by bribing the households where the survey meters are installed.

“The statistical data provided by BARC Measurement Science Team showed an abnormal and inexplicable increase in viewership”, the BARC disciplinary council had ruled, according to the report “Furthermore, subscribers (India Today) reply and/or representations do not provide satisfactorily explain the abnormal increase in the viewership.”

Further, the order made this startling observation:

It begs the question why India Today has been in overdrive in cornering Republic TV on the move by the Mumbai Police commissioner when they indeed themselves have been caught in the act in the past. It also fits in the assertion by Goswami that the FIR filed in the present case by the BARC’s asset agency Hansa referred to India Today and not Republic TV.

Subsequently, a Republic TV journalist had a witness confessing that her son was asked to watch TV Today network to illegally increase their TRP.