Indian tricolour burnt by Khalistanis in London: It’s not a crime here 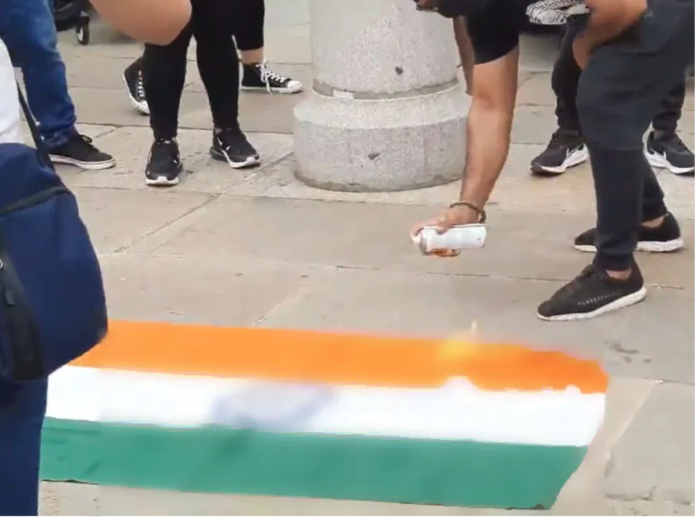 Two Indian tricolour flags were set ablaze and then stamped by Khalistanis on Trafalgar Square, London, to mark the anniversary of Operation Blue Star.

The Khalistanis people were seen with banners donning the terrorist Jarnail Singh Bhindranwale. A Sikh woman selling the T-shirts, told the reporters, “It is important the next generation knows about this.”

Responding to the action, the Indian High Commission has issued a statement saying that they are extremely concerned and distressed by the event. The Commission said, “We have taken note of the people who were there trying to desecrate the flag, and we will take action. We were also surprised to see that the LTTE (Tamil Tigers) were present. The numbers who turned up were far less than in previous years, which demonstrates that they are failing to muster enough support for Khalistan, besides the continual failure of the whole movement.”

Naomi Canton, the UK based journalist shared several videos of the incident in one of which, a man can be seen setting the Indian national flag on fire and once he put the fire, he put a flammable spray to ensure it burnt down to ashes. They can also be heard raising slogans like “Khalistan Zindabad” and “Na Hindi, Na Hindu, Na Hindustan, Banke Rahega Khalistan”.

Meanwhile, the British police officers arrived at the incident spot once both flags were gutted. One of the officers informed that they aren’t “specifically aware of any flag being burnt” and that nobody has been arrested as setting flags on fire is not a criminal offence in Britain.