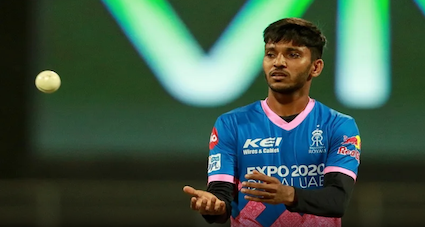 Chetan Sakaria, for those who watched Monday’s match between Rajasthan Royals and Punjab Kings, was an instant celebrity in the way he bowled on a batting paradise and managed to pick up three wickets too—and that too in his debut appearance in Indian Premier League.

The 22-year-old finished with 4-0-31-3 but his background, adversity and the way he battled personal tragedies left former India star Virender Sehwag overwhelmed.

Sharing some snippets of from Sakaria’s mother interview, Sehwag wrote, “Chetan Sakaria’s brother died a few months ago from Suicide. His parents did not tell him this for 10 days as he was playing in the Syed Mushtaq Ali Trophy. What does cricket mean to these young cricketers and their parents! The IPL truly fulfills Indian dreams and some of the stories are absolutely extraordinary.”

Chetan Sakariya’s brother died of suicide few months ago,his parents didn’t tell him for 10 days as he was playing the SMA trophy. What cricket means to these young men,their families .IPL is a true measure of the Indian dream & some stories of extraordinary gritðŸ™ðŸ¼Great prospect pic.twitter.com/r0mISy9Asv

Sakariya lost his brother just a few weeks prior to the auction but did not let the personal tragedy shatter his hopes of playing top-level cricket in the IPL.

Not only this but he also praised the youngster for his fearless approach and compared his temperament with former India left-arm seamers Zaheer Khan and Ashish Nehra.

“I’ve heard his name, even saw him bowl in domestic games but didn’t expect that he would bowl so well. You face different batters in the domestic circuit but in IPL, you come across big and renowned batsmen. We got to see his temperament. He was fearless,” Sehwag told Cricbuzz in his interview.

“Zaheer Khan and Ashish Nehra always say that as a bowler, you should never be scared of getting hit for a boundary. Until you won’t get hit, you cannot learn and pick wickets. So, I think, he [Sakariya] exhibited that kind of temperament,” he added further.

Sakariya hails from Gujarat and was purchased by the Rajasthan Royals for INR 1.2 crores during the IPL 2021 mini-auctions in February.

In his opening match, he took the crucial wickets of Punjab Kings’ openers KL Rahul and Mayank Agarwal along with Jhye Richardson.

He plays domestic cricket for Saurashtra, one of the three first-class teams of the state. The speedster made his debut in competitive cricket during the 2017-18 Indian domestic home season.

Jaydev Unadkat’s injury paved Chetan Sakariya’s way for a Ranji Trophy debut for Saurashtra during 2018-19 season. Having waited and strived hard for long and also not aware of the next opportunity, he took a five-for against Gujarat on his debut and ended up taking 29 wickets in the season.

Earlier this year, He was impressive in the Syed Mushtaq Ali Tournament picking 12 wickets in 5 matches at a stunning economy rate of 4.9 including a match-winning spell of 5-11 against Vidarbha in one of the matches and this became his gateway to the IPL.